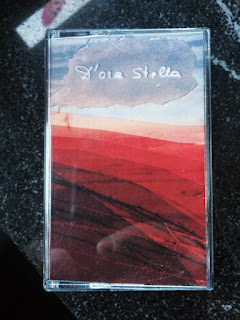 Recently, Disaster Amnesiac put together a Bandcamp page for my late uncle. He managed to preserve his demo tapes through years of homelessness and other hardships. I mention this because his songs are all of the acoustic, singer/songwriter variety. They were much more enjoyable than I imagined they'd be, and, in some way, they prepared me for listening to Old Bicycle Records' newest release, D'ora Stella.
Mrs. Amnesiac has described the release, with its mellow-strummed acoustic sounds, as "Music for a Sunday Afternoon", and I absolutely agree with her.  D'ora has a very relaxed, melodious feel throughout. Tunes such as Fino a notte fonda, dal piccolo ED. alle 4.00 senza the, and un horror che non va in tv, with their dulcet strumming and understated vocals, are perfect for lazy lounging or quiet contemplation. Disaster Amnesiac has been especially entranced by specchiarsi, tra fonde orfane, with its slightly Medieval chord structure and the addition of rain sounds as accompaniment to them. At times, I wish that I could understand the lyrics, but, in some ways, their incomprehensibility to me makes them ever more dreamy and surreal!
Openly Romantic in its aesthetic, D'ora Stella can clearly provide a soothing mental blanket with which to wrap around a harried mind.
Disaster Amnesiac hopes that Andrew Pino's songwriting had the same effect on his mental state that D'ora Stella has had on mine.
Posted by Mark Pino On Drums at 6:30 PM 5 comments: