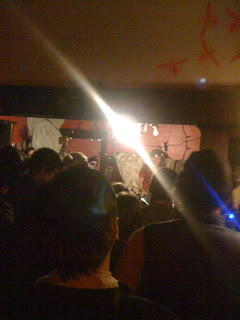 There were a ton of choices for live shows on this evening, which seemed like the first really Spring-like one of 2011. Mike Watt in SF, Mudhoney in Oakland, Kowloon Walled City in SF, Kreamy 'Lectric Santa in Oakland.
Scarp, Jason, and Disaster Amnesiac chose the latter, much to our mutual happiness. KLS, with their mixture of Punk, Prog, Metal, Rock, Jazz, etc., were so lively and inspiring. The mixture of guitar and violin as lead voices provides a very rural, gritty feel to their tunes. Their drummer is a beastly player who leads the bassist through all of their twisted rhythmic turns. Their music is fun and compelling. Their personae are down to earth and welcoming. It was just great to see and hear a band in the house party setting, without pretense and boring show biz accoutrement.
I've read on-line that the main two band members are moving to the Eastern Seaboard, and this show was to be Kreamy 'Lectric Santa's last. I hope not. The music scene needs this band. Perhaps they'll reconsider, once they settle in the North Carolina. 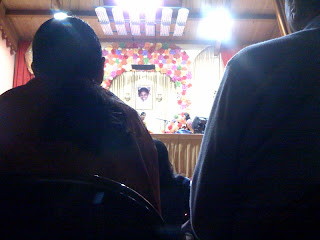 I just want to say that this performance proved to me that music can lift the saddened spirit. Mrs. and Mr. Amnesiac spent $25 each for an evening of wonderful Carnatic devotional music, with all proceeds going to assist volunteer efforts in Japan's devastated Fukushima region.
The soaring vocals of Smt. Sangeetha Swaminathan, with accompaniment by Shri. Shriram Brahmanandam on mrudangam and Smt. Lakshmi Balasubramaniam on violin held us in rapture for over two hours. The trio wasted no time, diving into deep playing within seconds of the start of the concert; this standard remained present throughout the proceedings. Carnatic music, with its ancient base of song-fueled improvisation, is truly remarkable and wonderful to hear.
The deep improvisatory interplay gave much inspiration to this tired and frustrated reporter. It was humbling to be inside of the beautiful space of the M.A. Center, whose credo, "Embrace the World", rings true, even during the tougher spells that come our way.

Thirty years into their career, and the Ex have proven themselves to be perhaps the Rock band most capable of using change in their favor. If you can think of a band that has lost so many defining members and subsequently soldiered on to make fresh new sounds, please let me know. And, no, the Fall don't count. Their sound stays pretty much the same, and that's a good thing, too. But, this post is about the  Ex, and their most recent LP, Catch My Shoe.
The Ex's latest change is the departure of G.W. Sok as lead vocalist. It's been written elsewhere that he remains a vital part of the Ex, running their merchandising division. That's pretty amazing, as anyone who has spent time within a band would likely attest. Sok's replacement, Arnold de  Boer, does not radically depart from the Sok's singing style: lateral, left-leaning incantations, somewhat tossed off, but highly effective within the Punk aesthetic framework of the band's Rock approach.
It's de Boer's added guitar that gives the most joy to Disaster Amnesiac.  This addition has given long time member  Andy Moor and founding member Terrie Hessels the impetus to add baritone guitar to the Ex's spiky tones, in lieu of the bass guitar, which has been dispensed with completely. Moor, Hessels and de Boer proceed to make some of the most adventurous guitar music heard around these parts in some time. Their traditional spindly, heavy rhythmic guitar sounds remain present, but throughout Catch My Shoe, they also achieve the most amazing African sounds. This sound features interweaving, polyphonic patterns and melodies, paired with tones much like the over-driven and distorted beauty of the mbiras utilized by Konono No. 1 or the the low budget recordings of so much of the Ethiopiques series. The various offspring of the Blues have forever craved the ability to "return to the Motherland", sound-wise. The creative way in which the Ex have achieved this feat with the guitar tones on Catch My Shoe is stunning and admirably brilliant. All the tours to Ethiopia and who knows where else in Africa have clearly been worth it. If this is the World Music of the 21st Century, consider Disaster Amnesiac on the band wagon.
It's often seemed as if Katherina Bornefeld is the Ex's secret weapon. The imaginative guitar modes of the band's six stringers have clearly needed a lot more than standard/stock drumming, and Katherina has always come up with her own methods of giving the tunes propulsion and beat. Her beats have always been gargantuan! Her solid, driving, "whole kit" playing, with lots of tom tom beats, cowbell patterns, and snare drum rolling, continues to evolve. Take for example the way she sounds as if she's taking control of the entire tune on the second half of Tree Float. One senses that time spent around Free Improv MASTER Han Bennink has seriously effected a lot of her approach within ensemble playing. The fact that she manages to retain a clear, rhythmic pulse inside of this kind of wandering is just impressive as hell. Other tunes have her slamming kick/snare/hat beats worthy of Bonham or playing poly rhythms to equal Ronald Shannon Jackson's manic tom tom symphonies.  Her stylistic/musical development is just as impressive as the rest of the band's, and just as vital to the entire, evolving Ex sound. Her voice also shows nice signs of maturation. The Gurage dialect in which she sings her vocal feature on the album works really well for her range.
Other fine features of Catch My Shoe's include hot, stacked horn parts by Roy Paci, and white hot engineering by Steve Albini. It seems that Albini's role within the Ex's recorded sound cannot be overstated. He's recorded most of their long-playing releases for years now, and they all sound so much the better for it. He captures their vibes onto tape. They must have their mics and spots at Electrical Audio dialed.
The most exciting aspects of Punk for Disaster Amnesiac has always been its tonal and rhythmic reassessments of its Rock antecedents. Along with  their activism within the humanitarian/political spheres, the Ex have pushed these reassessments forward for an astonishing amount of time, and continue to amaze. One can't see them ever throwing in the creative towel and joining the ranks of Anarchy Nostalgia Brigades and their boring slam dance. They just keep making really creative musical statements, come what may in terms of the inevitable changes that life throws their way.
Posted by Mark Pino On Drums at 5:11 PM No comments: