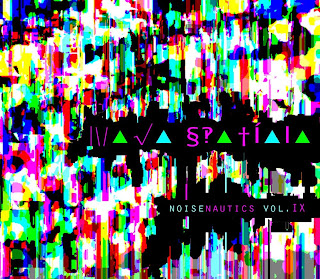 One thing that Disaster Amnesiac is learning for certain as I continue to dive into the download thicket sent to me be Muteant Sounds is that along with being a purveyor of fine Free Jazz, the label is also gifted with some really great Noise/Industrial acts. Seeing as that I'm a fan of the latter as much as being one of the former, taking a flyer on them was obviously pretty easy.
Bucharest based Nava Spatiala have cooked up their own brand of Noise, dubbed it Noisenautics, and have been lucky enough to have releaseed Noisenautics Vol. IX on Muteant Sounds. Consisting of two tracks, this offering from Miron Ghiu and Claudiu Chihaescu boils and bubbles with a pace that flows like hot lava.
Opening track Mental Noise Detox starts off with rocket ship sounds that are wrapped in spiky feedback and sharp dial tones. This combination forms a drone that sets up and continues for several minutes of Noise immersion. What Disaster Amnesiac has really enjoyed about this sound bath is the way in which it its pace allows for either deep listening or background ambiance. There is real depth to the sound processing, and the listener can either fall into it or stand/move/dance before it. I'm always grateful to Noise acts that allow the option! Nova Spatiala's promo blurb states that the group's sounds "...could make you dance or or get tripped out on a journey of sounds...", and I'm in full agreement with them. Detox wends its way through many discrete zones, but it always has the feel of being one piece. Picture yourself on a boat journeying down a glitch-ey river of multi-colored information that manifests itself as physical embodiment of sound. When it ends, you'll most definitely be feeling its traces.
Noisenautics Vol. IX second track, Morning Glory, cuts in quickly with percussive shaking sounds and more glitch.  What sounds like a keyboard ostinato takes up the pace even more, and the listener is off and running into a somewhat more claustrophobic area. Siren sounds rise up, giving the impression of a kosmiche krieg being fought. The battle lines settle in for more of the nuanced drone which Nava Spatiala are do adept at dishing out. Toward the end of the track, Disaster Amnesiac has felt encased in some kind of sonic ice block; these chilly sounds begin to warble and eventually lead to a very dramatic hard cutoff. I've actually had to go to their page at the Muteant Bandcamp page to check and hear if my file was corrupted. It wasn't. The track just has a jarring, hard stop that completes the listening experience is a somewhat frustrating way. Ah, well, I guess that Noise shouldn't be all about ease of use, now, should it?
Combining Noise with nuance, Noisenautics Vol. IX would surely be of use to fans along multiple stops of the Experimental Music spectrum. Maybe pair it with some of Muteant Sound's more Fire Music offerings for a greater view of the depth currently on display within the international Outsider Music world. Stay tuned for more reviews of Muteant releases, as Disaster Amnesiac is nowhere near the end of download codes sent over from them!
Posted by Mark Pino On Drums at 8:19 PM No comments: 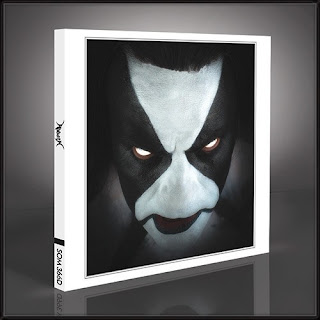 Every time that Disaster Amnesiac enjoys and/or writes about any Metal made past, say, 1990, I confess that I feel a certain amount of mental trepidation. It's the details that really scare me: it's pretty much a given that after that date, micro-genres within Metal began to take root, and one can certainly be called out as a phony for missing even the slightest detail. Still, Disaster Amnesiac continues to enjoy it, and goddamn but I've enjoyed the hell out of Abbath's powerful 2016 release, Abbath.
Marching boots let the listener know right away: there will be no peace for you here on Abbath as To War! slams in with a stomping groove from drummer Creature as Abbath frames it with some seriously violent, ripping tri-tones. A minute in, and the entire rhythm section locks in and leads in to a blast beat that supports the vocals. This piece is all kinds of dramatic, and I swear that I hear a subtle nod to Tony Iommi at one point. It's these kinds of nods to their antecedents that often make Metal bands compelling to Disaster Amnesiac; paired with the sheer creativity displayed on the opener, To War! sets the tone for the Metal massacre that follows it.
Abbath stays locked in for Winterbane, as Creature continues to slay behind the kit, driving bassist King and Abbath toward a pounding 2/4 breakdown and a snapping bridge part which grinds out Power Metal riffs. King coaxes huge steel pole riffs from his bass and Abbath throws out more delicious dissonance before Creature pauses, signalling a return to the stomp. Headbanging fucking delights abound before some fine acoustic picking pairs with a half time breakdown, evidence of master song crafting and arrangement. Abbath's vocals are great on this ending tag, too.
Perhaps a bit more Iommi influence shows on the spiky lead guitar intro to Ashes of the Damned, a medieval lute sound after which the group quickly pulls out their Thrash chops, a "demonic storm" of pure Metal fury, punctuated by well-placed synth hits. This cut travels into a major chord anthemic zone for a brief moment before that doomed lute arises again, leading to a quick, thrashing outro. Disaster Amnesiac's perceptions are left on the side of the road, whipped by the frenzy into exhaustion.
The pace slows down, but certainly not the energy, for Ocean of Wounds. Creature sets things up with heavy tom tom pounding. The thick guitar and bass tones perch atop the beat as Abbath croaks out his lyrics. It all leads to one of the best hooks that Disaster Amnesiac has ever had the pleasure of hearing from Black Metal. Every time I hear it, my excitement level jumps up several notches. Abbath seem to know not to abuse a riff like this, as it's only utilized twice before the songs fades away. Disaster Amnesiac has already mentioned song craft, but dammit, I must do so again. Abbath is awash in astute examples of it, and one need look no further than Wounds for great examples of it.
Then again, one really should continue listening, as I suspect one would, for Count the Dead. A post-battle order, given in the rain, presumably reeking of blood and guts, starts the song off as Abbath rips out high end chords for King and Creature to lock in with. They march through the grimy field and into yet another great goddamn chorus, repeated twice, before another blast beat is set up. The group swirls around within the fast rhythm as Abbath intones Simon Dancaster's bloody lyrical vision and spurts out a great melodic solo. Dig on how rough his throat sounds on that last chorus. Dude ain't holding back, that's for sure.
Speedy double time Thrash pushes the next track, Fenrir Hunts, quickly out into the air. Creature breaks things down while never losing sight of the beat as King and Abbath join him, speedily spraying out their Metal assault. The drums at times threaten to overtake everything else going on on this track. It's most definitely a showcase for a kick ass drummer. Abbath adds some more of his lead guitar voice as the trio breaks things down and falls into the blast. The ending portion of Hunts has a stumbling, almost tiered portion before returning to solid Thrash to end. An almost Technical Metal song, and Abbath nail it.
Is Root of the Mountain a sly nod to Blackmore or Priest? Disaster Amnesiac hears a lot of British steel in its opening, clean pre-NWOBHM tones that set up a solid 4/4 opening verse. They end up at a triplet feel, almost swinging, much the same that many bands did pre-Metallica. Clearly, as in Abbath's case, they still do, and it works. King gets downright Geezer on the bass here, too. This one's absolutely rooted in the sounds of Abbath's progenitors, but they've built their own, powerful sounds and firmly embedded them on this mountainside.
Abbath concludes with tight thrashing of Endless. The group, seemingly not contented to end with the power and majesty of Root, throws down one last ripping gauntlet of pure speed and fury. They lock in with more of that whip tight precision, in Dancaster's words, "....Dauntless Fearless Tireless Relentless..." Ah.....hell yeah. Forty five or so minutes in, and Abbath is still kicking the listener squarely between the perceptual nuts, and that ending fade guarantees that they'll still be there for you when you return, waiting....
If you're a fan of well crafted, tightly played Metal, of the Black or many other varieties, you surely will want to return to Abbath, too.

Posted by Mark Pino On Drums at 2:15 PM No comments: 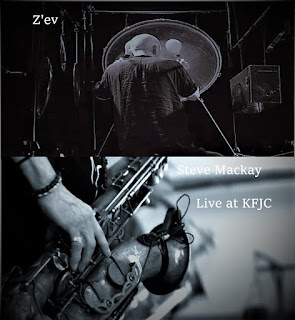 The initial plan that Disaster Amnesiac had for reviewing the massive Muteant Sounds file transfer was strictly linear. I'd get to each one in the order in which they'd arrived. It was scotched when Live KFJC 2007, the recording of z'ev and Steve Mackay in duo at the BEST RADIO STATION IN THE WORLD, arrived at my inbox. I knew that I'd be listening to it before any of the earlier ones received. Disaster Amnesiac had been very excited to hear it. I mean, come on! The brilliant Industrial percussionist paired with the equally brilliant Noise Rock tenor man, caught live and sweating in the Pit at The Wave of the West? There was just no question that I was gonna dive in pretty quickly.
Live KFJC 2007 starts off with metallic gonging sounds from z'ev, which are quickly joined by clicking pad sounds from Steve's tenor. Mackay does not stay there long. He plays a Bluesy statement shortly thereafter, which in many ways sets the tone for this set. It's not that there aren't plenty of moments of fiery abstraction from the two masters of the their craft; indeed, plenty of moments of energetic wailing, especially from Mackay, occur. That said, as I've listened, it's struck me just how earthy and, again, blue, so many of the sounds on this recording are. Disaster Amnesiac hears a lot more Ornette than Pharaoh, let's put it that way. I'm pretty sure that there's a Lonely Woman quote at some point, even. Steve is by no means subdued with his playing. It's just quite contemplative much of the time. z'ev does a great job of matching Mackay's sax language. I've marveled at his ability with accompaniment on here. At times, Disaster Amnesiac has thought to myself "...z'ev plays the Blues...", mostly on account of just how in the pocket his playing is throughout. Aside from some short bursts in which his partner lays out, z'ev sounds content to lay down relatively quiet percussive patterns and drones alongside the sax. As usual, it's all he really needs to do: when z'ev's playing, one is bound to feel it, whether piano or fortissimo. The essential quality of z'ev's musical adeptness, shown by the way in which he can mesh with another player, is a huge revelation here. I realize that he spent a lot time in his later years playing in combination with other musicians. Still, that point really comes out on Live KFJC 2007.
This relatively short release features two committed and proven musical greats, melding their aesthetics into an earthy and subtle statement. Right at the end, as they introduce each other, you'll realize, again, that they've both left us. Lucky for you and I both, they left us with recordings such as this. Cue it up and drift on off.

Posted by Mark Pino On Drums at 8:51 AM No comments: