The Big Drum in the Sky Religion-Hell Hath No Fury; 3 CD-r set; Beard of Snails Records, 2013 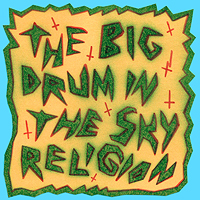 Disaster Amnesiac completely understands why these three separate releases from The Big Drum in the Sky Religion have been packaged into one deluxe package from Beard of Snails. Each of them features this big, bombastic drone, under which different instrumental or Musique Concrete passages reside. A bit more on the latter shortly. First, I'd like to describe the former a bit, seeing as it is such a vital element to all three discs.

The best way that Disaster Amnesiac can describe the central drone that runs across all of the well over three hours of music on Hell Hath No Fury is to compare it with that of Metal Machine Music, in that it has the same high end, ultra-treble-ey ping. Within that densely layered wall of sound reside all kinds of micro-tones and high end frequency whorls. As I've listened, it has brought up images of mighty rivers, clanging junkyard action, windy mountain peaks, humans screaming and crying, and tornadoes, just to list a few. For those that love to listen to these types of massive drones, the appeal seems to reside within the endless variations of sound that can be heard within the ostensible chaos. The Big Drum in the Sky Religion has presented a masterful example of such a drone herein.
Now, for the component parts of the release:

Hymn to the Beast With Two Backs-this one is the most traditional of the trilogy, featuring guitar and drums dueling it out for most of its over 70 minutes' duration. Breaking up the scrawl is one floaty, almost ambient passage, after which the cathartic pounding continues, eventually leading to some plaintive banjo strumming. This one is like a Metal Machine Music dance mix.

Rangda Electric-here we find the overall drone paired with Indonesian-sounding bells and what sounds like chanting. Disaster Amnesiac wonders if these are recording made by the principle artist of  The Big Drum in the Sky Religion, or older field recordings from an LP? Rangda runs continuously for over an hour before ending with yet another banjo piece.

Vodou Chile-simultaneously my favorite disc of the release and the biggest disappointment for me. Disappointing because my copy has a skip that just won't go away, no matter the cleaning solution used. Favorite because of its percussive, almost steel drum sounding banjo and cutting electric guitar caterwaul. The banjo achieves Doc Boggs levels of mountain primitive underneath the pervasive drone. Disaster Amnesiac just wishes that he could get to the end of this ceremony!

The Big Drum in the Sky Religion has been shamanizing in and around Harrisonburg, VA for many moons now. There are many recordings available, and for free to boot, at their web page. Anyone who enjoys long drones or noise would do well to avail themselves of a few of their rituals. 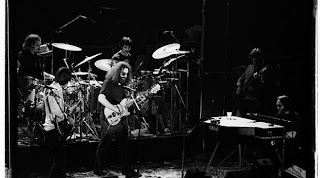 In terms of the Grateful Dead, the year 1978 does not generally warrant much enthusiasm from Disaster Amnesiac. This is probably due to the absolute love that I feel for all 1977 recordings, that year evincing a kind of lightning in a bottle magic, a psychedelic juggernaut of a band casting pearl after pearl of musical greatness. It may also be due to fact that the tapes from the former year that I have heard (and watched, via the Closing of the Winterland DVD), feature the group with a sound that is just different from the latter. It is tough to qualify what makes a band's sound magical or not so magical; that said, 1978 Dead sound has often struck Disaster Amnesiac as a bit less fleet-footed, not showing as much of the quicksilver energy so much on display in '77. It's often sounded to this listener as if the band is just sort of tired, maybe burdened by a bit of "business as usual" lackluster.
It has been from this vantage point that I have listened repeatedly to Dave's Picks  7. I say repeatedly in truth. This recording has been so very enjoyable, the band so surprisingly (to me) on, that it has been a mainstay during my coveted Listening Time for several, full version, delightful spins. Dave's Picks 7 has been an ample reminder of the fact that, for anyone inclined to enjoying their sometimes elusive (save 1977,of course), X Factor, the Grateful Dead were capable of unleashing it during any of their eras.
It's all there: "question everything" humor in the form of extensive quoting of the then-current hit single Stayin' Alive during Me and My Uncle and Big River and a slightly less obvious Time Has Come Today riff on Rhythm Devils, a goofy, wise cracking version of Werewolves of London; throbbing rhythmic subtleties on Friend of the Devil; Bob's hot rockin' macho on Passenger and Around and Around; deeply emotive Jerry-sing on Must Have Been the Roses and Black Peter (it has occurred to Disaster Amnesiac how much this song could be used to describe Mr. Garcia's life, post 1978); Phil's booming bass attacks and silences; Keith's Baroque/Boogie Woogie fusion; and heavy interplay in the form of a somewhat slower, yet towering Scarlet Begonias>Fire on the Mountain>Good Lovin' second set stomp.
Dave's Picks 7 offers new sounds, too. Take for example Weir's slide playing, which gives the Scarlet>Fire an Allman-like ride and adds new aspects to Ramble on Rose. One may also notice the change in timbre from Garcia's guitar. The Dean Markley sound had been dispensed with, and there are many examples of the sound that would emerge fully in the 1980's, particularly during the coda of The Music Never Stopped, which reminds me a lot of his work on Ornette Coleman's Virgin Beauty LP. I'm no expert on his pedal set up, but it sounds to me like he'd been tweaking it to get new sound aspects. Disaster Amnesiac has also been mightily impressed with the group's vocal harmony blend, too. In fact, this aspect is equal to or even better than their 1977 efforts, especially as regards Donna Godchaux. If I've heard a better performance from her within the Dead context, I'm unaware of it. Check out her solo spot during the transition from Scarlet Begonias>Fire on the Mountain for a fine example of what I'm talking about. Grateful Dead writers often mention her and Keith's malaise at this late date in their later Dead days, but, wow, she had a great night in Normal.
Not necessarily new, but on full display on Dave's Picks 7 is the way in which Mickey Hart and Bill Kreutzmann lock in with such effectiveness throughout the show. Their duo playing runs the gamut from chunky funk to spitting lighting on the tunes, and their Rhythm Devils spotlight strikes Disaster Amnesiac as being easily as "primitive" as the earliest Amon Duul at times, always a good thing with psychedelic hippie drum jams. I have thought about how much these two carried the band during the hazier periods post-1980, and one can hear this dynamic in its early incarnation here.
Along with being simply a highly enjoyable listening experience, Dave's Picks 7 may have convinced Disaster Amnesiac of the merits of the Grateful Dead's 1978 sound. I wonder if this three disc set is a precursor to Volume 8 being a feature for a 1980's or 1990's show. A lot of comments at Dead.net have been suggesting such a release. Perhaps those that have been making said comments are aware of some unreleased shows in which the band was able to kindle their patented interactive gestalt?
Posted by Mark Pino On Drums at 3:24 PM 2 comments: 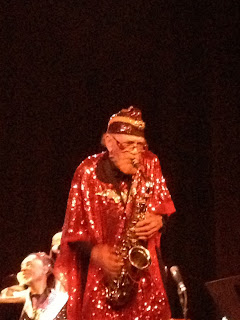 Disaster Amnesiac feels certain that last night's concert at the Mission District's venerable Victoria Theater will go down as a high point for live music in the Bay Area for 2013.
Waiting in line for admission, I felt a great, freaky vibe emanating from the hundreds of music fans and Mission street people. Thankfully, the vibes were realized inside, despite lengthy delays in getting everyone seated and starting the music.
Owing to that delay, Disaster Amnesiac felt a bit inhibited as regards taking photos of the first two groups. Let me say this: Hans Grusel's Krankenkabinet performed a great piece for strings and electronics, in which a Power Electronics blast was paired with Black Metal vocalizing and really neat costumes and props (Grux?). Their sounds gave this listener a nicely powered lift. sfSoundgroup played two long pieces, the first by Luciano Berio and the next by Krzsztof Penderecki. Berio's sound worlds, free-standing spaces of their own, must be entered at their terms, and if this is done......yeah, BEAUTIFUL. Note to the SF Orchestral Establishment: performances of this music can make $$$$!
Standout players from this group were John Ingle and Joshua Allen, with their saxophone POWER, and equally strong bassist Scott Walton, who drove the Penderecki piece ferociously.
As for the Arkestra? Their Space Jazz music, so abstract and so warm, so swinging and so fiery. Disaster Amnesiac had not seen them since a Halloween show at Slim's in the early 1990's, and I wept tears of joy upon realizing that I was being treated to the amazing sounds of Sun Ra, his myth living in arrangements that he left behind, sparked by the loving mind of Marshall Allen and his big band cohorts. It strikes me that the Arkestra means a lot to a lot of people, and this shows when they play. The make people happy with their mixture of standard tunes, Ra originals, New Orleans funkiness and 21st Century space blasts. I just can't sing their praises enough. 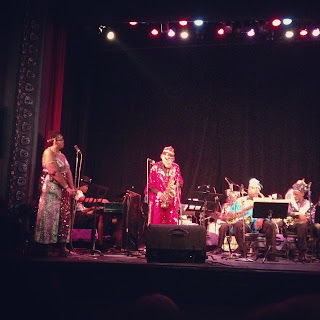 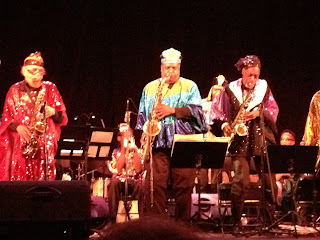 Above: the Arkestra lives! 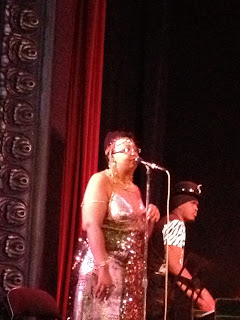 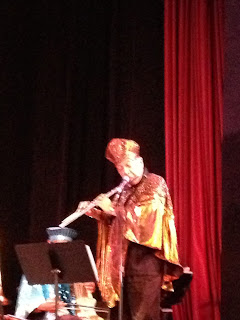 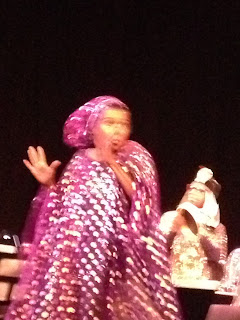 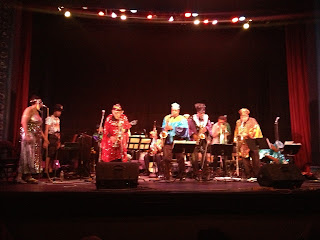 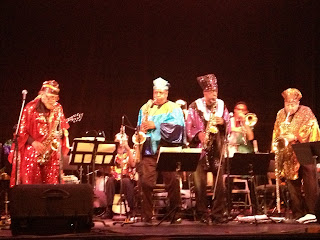 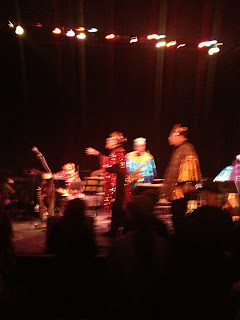 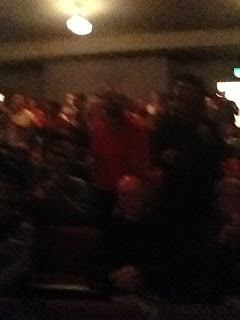 Major kudos to Kirschner Concerts and their partners for putting on this great event! Space is indeed the Place!

Posted by Mark Pino On Drums at 9:22 AM No comments: