The Joe Perry Project-Let the Music Do the Talking; CBS, 1980 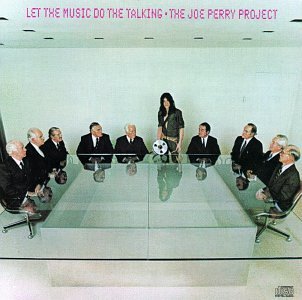 Aerosmith singer Steven Tyler has been in the mass media spotlight a lot during the past several months, primarily, it would seem, as the result of his sitting on the judge panel for American Idol. Disaster Amnesiac caught a bit of his 60 Minutes interview, in which he threw a few public barbs in the direction of his long-time songwriting partner, Joe Perry. Perry was given air time to retort, and the way in which his face screwed up tight when the interviewer read back Tyler's statements to him was pretty telling.
In purely musical terms, Perry's solo debut, Let the Music Do the Talking, is equally telling. It tells the tale of the more "silent" half of what was by then the hugely popular Tyler/Perry partnership striking out on his own, leaving the successful albeit drug addled Aerosmith orbit, and launching off into spaces of his own. The songs on this album show pretty clearly which one did the heavy lifting, at least as regards song writing.
The title track's opening salvo pretty much slams the message home, with a big-riffed, energetic post-Boogie Rock, Perry's snaky slide work slathering grime that Punk pretty much whole cloth wished it had (save for Ginn and precious few others). Similar goings on, of an even more unbridled nature happen on the amazing Shooting Star, which features hooks and riffs of earth moving weight and depth. Drummer Ronnie Stewart deserves special note here. What happened to this guy? His beats move and shake these two tunes, and all others on the album, with a non-bashing, yet hard, approach. Hopefully he continued drumming. Stewart's partner in rhythm, bassist David Hull, gives the tunes a buoyancy, snapping funky undercurrents on the almost Jazz-Rock Fusion feel of Rockin' Train or the classic Cock Rock of the Ready on the Firing Line (a total presage of the 1980's later Hollywood Power Cock Rock sounds). The quartet on Talking is rounded out by singer Ralph Morman, a fine front man in the classic (little c) Rock mold of Ian Gillan or Paul Rodgers, evocatively, unashamedly singing a Rock band's songs. His lyrics can seem a bit dorkily suburban at times, but Disaster Amnesiac finds no reason to be ashamed of his enjoyment of said lyrics. If you have too much taste to appreciate their simplicity and his vocal delivery, I understand but can't concur.
Let the Music Do the Talking is a rockin', rollin', blast of a great Hard Rock record. Every song is expertly crafted and played (even the pretty clear "in studio knock off" Break Song, equal parts Link '59 and Jimi '67), and the whole thing hangs together in a way that screams out partyin' good times and up from the ashes success. Perry would eventually re-align himself with Tyler and make Aerosmith even more of a conglomerate Rock behemoth a few years later, but in my opinion, he should have stayed his own course, with this band, and made more of this style of expert Hard Rock.
Posted by Mark Pino On Drums at 2:47 PM No comments: 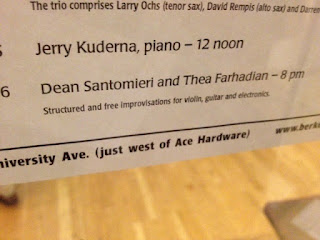 Long time S.F. Bay Area scene stalwart Dean Santomieri and his musical partner, violinist Thea Farhadian, used their debut show as an opportunity to raise money for fellow musician Eileen Hadidian, an Early Music specialist who has been battling cancer. The mood in the Berkeley Arts storefront, while not somber, was quiet and composed. 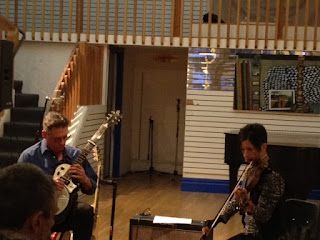 The first set, made up of duo improvisations, had the musicians exploring quiet melodic/harmonic paths, full of space and flowing rhythm. The set was characterized by a dignified, searching, exploratory vibe. Suggestions of Django, county fiddlin', Middle Eastern modes, and Tristano's groups came to Disaster Amnesiac's ears.
At certain points, preparations were used on their strings: aluminum for a drone effect, and alligator clips for Cage/Harrison type feels.

Below: Aluminum preparations on strings 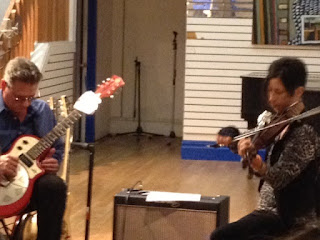 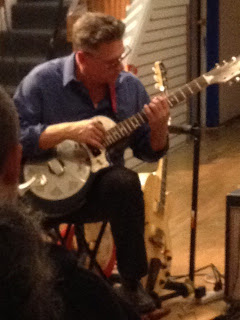 After a brief intermission, the second set featured solo pieces from each musician, followed by a few more short improvisatory songs.
Dean's solo piece, a spoken retelling of an early family trip to the wilds of Tennessee, gave new meaning to the term "praying hands". Thea's solos were made up of "duets" between her violin and Mac-based triggered sounds, which had nice old analog electronic feels. 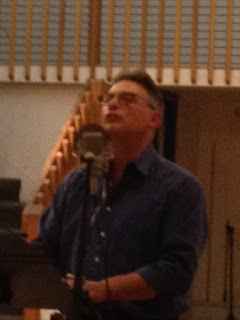 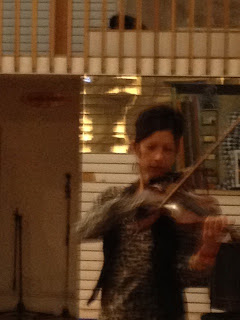 Above: Thea interacts with the Mac

Below: Santomieri and Farhadian bring it home 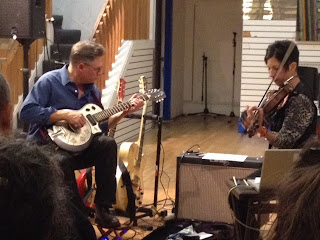 At the end of the evening, it was announced that over $1000 had been raised for Mrs. Hadidian.


Above: Brief snippet of Santomieri and Farhadian in flight
Posted by Mark Pino On Drums at 9:18 AM No comments: 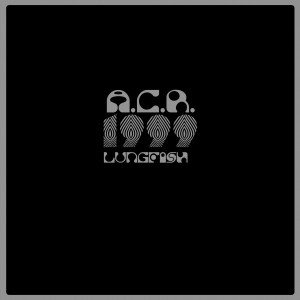 Disaster Amnesiac is a pretty big fan of Lungfish. I have published an interview with their drummer, Mitchell Feldstein, and gobbled up pretty much anything even remotely related to the band. I mean, do you have the Daniel Higgs mouth harp CD on Northern Liberties?
As you can guess, I was excited to read about Dischord's release of these recordings, made back in 1999 at Baltimore's A.C.R. studios and subsequently shelved.
Many of the tunes on A.C.R. 1999 were included on 2000's phenomenal Necrophones, but, still, this new release will surely be of great interest to Lungfish fans. It shows heretofore unseen aspects to what are some of their best songs, and a few new gems for fans to relish.
First, to the previously unreleased music. Comprised of four tunes and one more Musique Concrete piece (Aesop), the former show Lungfish's exuberant, ecstatic Rock Minimalist approach in full force. Screams of  Joy and Symbiosis stick to their by-then finely honed simplicity, which had reached an apex with 1998's Artificial Horizon,with sublimely repetitive drum beats from Feldstein and circular riffage from guitarist Asa Osbourne. Bassist Nathan Bell was masterful at providing counterpoint sounds to his rhythm section partners, laying down big, rich, low-toned chords. The sum total is one that shows movement though steadiness. A kind of sonic aikido. These two tunes, along with I Will Walk Between You, also feature Daniel Higg's private, poetic esoterica, his words painting rich pictures of his unique vision. These songs definitely fit into the Lungfish oeuvre. They share a lot of sonic characteristics with tunes of the same era, ones that ended up on 1999's The Unanimous Hour and the previously mentioned Horizon. Perhaps this was why they were shelved? At this point it doesn't really matter. The fact that they can now be heard at this far remove is fine enough.
Secondly, on to the tunes that ended up on Necrophones. If you are a Lungfish fan, I am sure that you've listened to and appreciated that album. In Disaster Amnesiac's view, it was a high point, perhaps the highpoint of their recorded output. Its songs stuck to the Lungfish template, but there were subtle changes in playing, new tones, and a general feeling of elation that had begun to (re)emerge. For examples of the former, listen to Shapes in Space, and for the latter, listen to The Words or Hanging Bird. I can recall feeling that they had made some deep collective breakthroughs, that a kind of light had begun to shine on the band. This is conjecture, of course. Back to the early versions of Necrophones songs, though. On the whole, the tunes sound a bit more "new", with rougher edges and less refined, slightly looser performances. They sound a lot less smooth on A.C.R. 1999; this less-refined feel gives tunes such as Sex War, Shapes in Space, and Hanging Bird, rawer, punkier feels overall, compared to their "official" versions. Band-centered music is in many ways all about process, and one can hear Lungfish in process at work in these earlier versions. Lungfish fans will be treated to extra lyrics that were edited out of the later versions of Sex War and Shapes in Space, and Disaster Amnesiac was downright stoked to hear cowbell in the A.C.R. version of the former tune. Far from being cast-offs, these tracks make for fine new experiences of these more familiar tunes.
A.C.R. 1999 provides a rare document of Lungfish not recorded at Inner Ear Studios. This is telling, and the sound of the record is different from their other LP's. The guitars and bass sound more present, louder, in the mix. This at times slightly buries the drums (interesting, in light of Inner Ear owner/chief engineer Don Zientara's quote about the drums suffering at the expense of the guitars on the early D.C. Hardcore recordings), but that is just a minor quibble. Engineer Craig Bowen's work is fine, albeit different from that of the Zientara/Mackaye tandem that is featured engineering most Lungfish recordings. Craig captures the band with a lot more loud presence, giving their sound an over-driven, "live" feel that is unique in their recorded documentation.
For years, Disaster Amnesiac relished and practically revered new releases by Lungfish. A.C.R. 1999 has been providing those same feelings again. Does its release suggest a return from "indefinite hiatus"?
Posted by Mark Pino On Drums at 1:53 PM No comments: