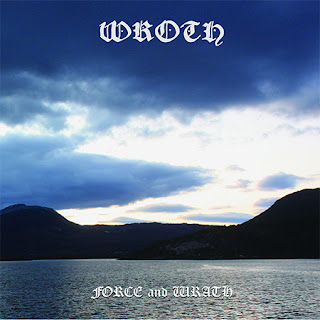 The shopping list for a recent trip to Amoeba in Los Angeles was headed with the simplest reminder for Disaster Amnesiac: "Some Black Metal", and, thankfully, I was able to find a really fine example of such in Force and Wrath by Dutch band Wroth.
This disc has been my constant Metal soundtrack for a few weeks now, and I'm seriously loving the deeply traditional Black-ness of it.
Take for instance the ripped, shredded vocals from Jeroen. You just have to love his banshee wailing across all tracks. Disaster Amnesiac can recall the first exposures to Black Metal in the 1990's, and it was often the insane feelings that the singers projected with their vocals that made a fan out of me. Wroth's vocalist sounds just perfect within those parameters, somewhat buried (and decaying) within the instrumental mix.
Also ripping is the instrumental interplay within the band. Their songs run a gamut of almost-Street Punk sounding D-Beat, faster tempo thrashers, and full-on Blackened blasting. Every song has the kind of gnarled, close to going off of the rails primitive energy that I have learned to really love from the genre. Screw "prowess", Wroth's music strikes this listener as being all about heavily evoked moods and feelings. Their full bore blasting passages on tunes such as Darkness Emanates have brought up memories for Disaster Amnesiac of reading Val Wilmer's great early 1970's book As Serious As Your Life, in which one drummer suggests that he want's to "stop time completely" with his drumming. I feel as though Bram on drums, Kenneth on bass, and the forementioned Jeroen do so at times; imagine yourself staring into swirling whirl pools or tornadoes as you hear Wroth do their primal best thrashing. These are not linear time passages at all. Also really compelling are tunes such as Blood On Dark Soil, in which they get this great feeling of wheels turning, spinning onward over some Metal Highway: an upgrade on the initial NWOBHM template!
Also included at the end of this disc are six tracks of demos, in which Wroth sound even more primitive and crushing, despite their having occurred later in time.
Disaster Amnesiac has an acquaintance who feels as though Black Metal bands are unimaginative and derivative. I must disagree. Bands such as Wroth, seem to me to be using the influences of early bands, within Black Metal and without, to conjure up compelling new heavy sounds. Find this one and let it rip your mind to shreds.

Posted by Mark Pino On Drums at 4:02 PM No comments: 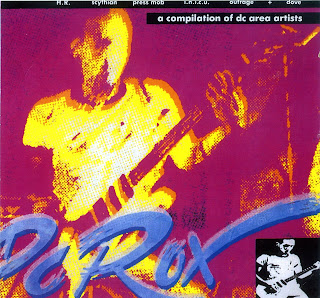 There is a scene in the recently released, and really great, Salad Days documentary in which Dischord Records co-owner Jeff Nelson addresses the fact that his label had to, by necessity, focus upon only a small sliver of the greater music scene within the Washington D.C. area. Disaster Amnesiac fully comprehended his logic; that city has as vibrant a culture, especially "underground", as any other in America. Naturally, after the film's conclusion, I began thinking about some of those other bands, and quickly dug out my copy of this 1987 compilation.
Much as the initial D.C. Hardcore scene had been, many of the musicians and bands featured on DC Rox seem to have aesthetic/inspirational roots stemming from the music of Bad Brains. Indeed, front Brain H.R. and his brother Earl make an appearance herein on the kick-ass thrasher It'll Be Alright, with its blazing guitar leads from David Byers and David Jordan, and the Apocalicious Ras Metal of Power of the Trinity. Such an original and inspirational voice! As Disaster Amnesiac recalls it, much of the national Hardcore Punk scene had soured on Huntin' Rod by the time that this LP appeared, but he gets pretty much top billing on Rox. And, really, why not? His music and bands were just as powerful during that era. I have no idea if and how the controversies that made for Bad Brains vs. Hardcore U.S.A. were resolved, but am certainly happy that the former managed to continue documenting their musical moves.
Also makin' moves on the comp are Press Mob, featuring the great vocal talents of Spyche and more Dr. Know-rooted guitar shredding from James Proctor. Press Mob definitely sound as if they've taken a bit of inspiration from Bad Brains, but their vibes on Dream In Kind and Sundays are pretty unique. The vocals give them plenty of melodic, almost Pop, flavor while Proctor's guitar shades them Metallic. The rhythm section of Banks and Fat Vice is organic sounding and grooving. These guys are not fakin' the funk. Disaster Amnesiac has pleasant memories of seeing this group wig out live-they lifted the stage, for sure.
Similar to Press Mob in that their sounds fuse heavier Rock styles with gritty Funk and touches of Bad Brains-style Rasta is Revelation. Front man Jimi Jam's vocals can come across as a bit reedy, but the conviction with which they're delivered never fails to make this listener smile. I saw him at shows sometimes during the mid-late 1980's, and he seemed like a good guy, full of enthusiasm for the music. On Babylon Days Are a Comin', guitarist Kenny Dread drops all sorts of sound bombs onto the listener's head while Skeeter Thompson and Greg Miller move things along on bass and drums respectively. They also deliver a kind of Techno Metal on HMDS (Bonzo); quite a strange track!
One of Disaster Amnesiac's favorite D.C. bands of that era was Scythian. I loved their odd mashup of Psych Rock, Metal, Punk, and God only knows what else. Their two songs on Rox, while suffering a bit from their somewhat thin sounding engineering, always make me smile. Guitarist Matt Ray rips, vocalist Zack Fuller sounds crazed, and drummer Eric Wallgren does a great job of fusing Metal chops with Punk energy. I wore their t-shirt with pride, and wish that I could find more recordings from them. Anyone?
Original D.C. Hardcore scene guy, and Double O front man Eric L. leads his group Dove through the emotional requiem for Toni Young on Wrecking Ball. Many other D.C. bands were labelled "emo" at that time, as they sang to each other about heartfelt feelings; this tune has all of that weight and seemingly more. The darkness that Wrecking Ball hints at can be frightening at times. Sometimes I feel as though this one could have been a hit at that time, but it's probably just not phony enough for chart action. Does Eric still lead a band?
No discussion of D.C. music and culture would be complete without mention of Go Go, and DC Rox features some great Go Go/Metal fusion by way of Outrage and their track Life Abuse. Not only does their drummer have a great drummer moniker, Boogie Foots (oh, hell yes!), but he leads the band through a song by turns wailing and grooving. Again, Bad Brains' influence seems likely here in the way in which Outrage blends styles within a powerful matrix; the former cannot be cited enough when mentioning that dynamic, while the latter reap pleasing aesthetic benefits from those innovative approaches. If you're a fan of Go Go, you'll likely be pleased with this track, too.
Perhaps the strangest band on Rox is I.N.I.C.U., which seems to be a kind of jam band made up of some rotating cast of players. On Body, with its goofy lyrics and shout outs, they come across as the kind of wacky group that can rock a good house party, while on Not Satisfied/Mushroom Tea they bring their own Metallic Dread to the party, blazing through it in a few short minutes.
While the scene documented within DC Rox's grooves has not had the historical impact of that shown on the previously mentioned Salad Days film, you have to hand this to them: someone involved had the good sense to put some sort of document of their collective work together. Somehow, Disaster Amnesiac doubts that they were sitting around nursing sour grapes over not getting the Dischord imprimatur. I figure that they just went ahead and handled shit for themselves. A VERY D.C. way to go about your business.