Disaster Amnesiac suspects that there are many people like him who own a copy of the great Punk Rock coffee table book, Hardcore California. The book's twinned focuses, the post-1976 underground music scenes of  Los Angeles and San Francisco, are given thorough treatment. It is made especially clear in the S.F. section that this scene was rich and well populated, with tons of stylistic variety and personality. One of the groups that is mentioned in that section, Noh Mercy, is briefly described, given a few photos, and has the lyrics to their song Caucasian Guilt reproduced. I have often been intrigued by this group as I've thumbed through my very well-worn copy, but, up until very recently, have never heard the sounds made by the two women that made up Noh Mercy. Re-issue label Superior Viaduct has made it possible to hear this short lived group's great, arty Post-Punk. Disaster Amnesiac suspects that if you, too, own a copy of Hardcore California, or were there to see and hear Noh Mercy in person, you'll want to swoop up a copy.
Noh Mercy's most notable difference from their peers was their primarily, sparse, drums/vocals line up, featured on the first four songs of the release. In the liner notes, drummer Tony Hotel mentions their initial decision to stick with this simplified line up, and it is very hard to argue with her assertion that their music "sounded complete just by ourselves". Hotel's drumming shows varied influences. Jazz poly-rhythms, traditional international/cultural rhythms, Modern Compositional approaches; all of these elements and more can be heard within her drumming as she frames and drives Noh Mercy's tunes. Hotel's musical c.v. includes time spent at Berklee in Boston, as a session musician in L.A., and as a journeyman Jazz musician in the mid-West, and all of those experiences definitely served her well in utilising the drums as the primary instrumental focus of these songs. Hotel's drumming is not of the bashing sort by any means. Listen to her press rolls on the band's cover of the Doors My Wild Love, and hear text book clinical mastery at work. As much as Hotel shows sophistication on the drums, she plays a mean, primitive, acidic Punk guitar on some tracks, and it works to place Noh Mercy within their contemporaries' vision of a kind of Year Zero as regards musicianship. As with many Post Punk bands, the guitar is used as more of a rhythmic element within the overall sound of the band, its primacy within late 20th Century popular song taken down a peg or two, perhaps returned to its original role, more part of the overall rhythm section.
Standing bravely alone on Noh Mercy's melodic front line was vocalist/keyboardist/rattle shaker Esmerelda. Her biographical summary in the liner notes shows a life that was already rich with experience by the time Noh Mercy began. It's clear that she had plenty of sources for insight, rage, and railing from the years preceding the band, and rage she does. Her lyrics do not paint happy pictures, but more dystopian views are given full airing. Esmerelda had plenty of musical history from which to draw, and that she does. Elements of earlier vocal approaches such as the wailing style of Esmerelda's early hero Janis Joplin, post-hippie drag theater (this realm begs more retrospective documentation), Glitter (do I hear Tim Curry in there?) are fused with the then-emergent harder Punk style to give a sometimes harrowing voice to the darkened insights of her writing. Disaster Amnesiac hears the continuation of the original S.F. Punk voice of Penelope Houston and what was surely an inspiration for later voices such as those of Frightwig, Meri St. Mary, and countless others right on into the present. Esmerelda's sharp, distorted, edgy  riffing on Farfisa and Moog organs gives Noh Mercy's sound a great, shimmery, Synth Punk edginess a la the Screamers or Nervous Gender. Needless to say, I like it a lot.
As for Noh Mercy's songs, they are sharp, tight, and dramatic. They sound as if they are the product of the varied influences that Hotel and Esmerelda brought to them. Not a peep of the generic "oh, so Punky" (thank you Rozz Williams!) vibe that many groups had at that time begun to feature. Put simply, they are intriguing and fun.Despite having been recorded in seemingly less than ideal spaces (a basement, the Catalyst in Santa Cruz), these recordings sound really good. Much respect to engineers Tommy Tadlock, Gary Hobish, and Peter Conheim. Clearly, all took care with their respective parts in the push to document Noh Mercy, then and now.
Disaster Amnesiac is excited about the prospects for further archival releases coming from Superior Viaduct.
I'd imagine that if you've spent any time pouring over the pages of books such as Hardcore California, or had the pleasure of being there as its events transpired, you might be, too. Getting Noh Mercy's sounds out into the public is a fine start!
Posted by Mark Pino On Drums at 12:58 PM 2 comments: 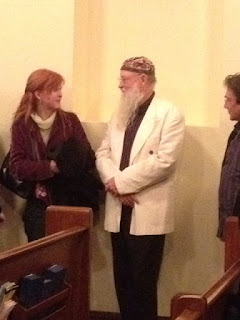 Disaster Amnesiac would venture to guess that for many fans of Modern Composition in the S.F. Bay Area, Terry Riley is kind of considered ours. The man and his music are local treasures. Needless to say, the minute he walked out onto the pulpit of Old First Church last night, he received copious applause without having to play a note. With an acknowledging nod, he sat down at the grand piano, and played. 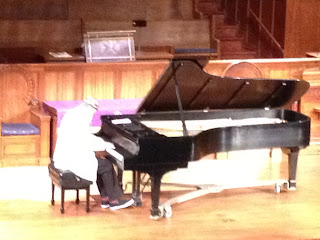 Terry's first set was comprised of five or six pieces, in which he showed his affinity for and skill with late 19th and early 20th Century forms, from Impressionism to Ragtime to Stride to Jazz. He melded his much-honed Kirana skills, learned from master Pandit Pran Nath, into these forms, at one point adding his signature singing to a beautiful alap. The sound struck me as a sublime fusion of Eastern and Western musical forms, very well thought out and organic. 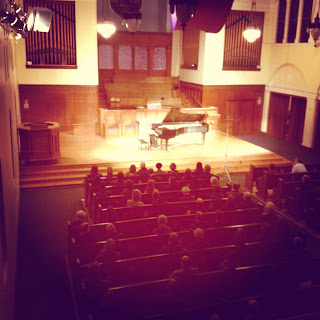 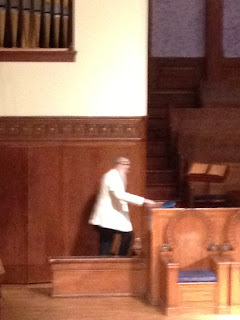 Above: Riley ascends to the organ

For the second set, Terry played a lengthy, heavy improvisation on Old First Church's substantial organ, which featured modes much more reminiscent of works such as Shri Camel and Descending Moonshine Dervishes. It was 45 minutes of sonic bliss and rapture! 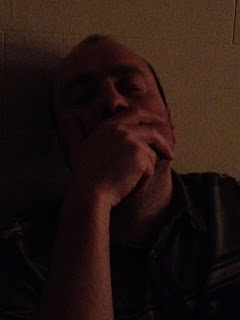 Above: Disaster Amnesiac in the bliss zone, photo sneaked by Mrs. Amnesiac

I can't say enough good things about Terry Riley. His presence is that of a holy man, although he would probably be embarrassed by that notion. Still, his long history of work, his wonderful music, and his mirthful presence make him an incredibly inspiring musician. 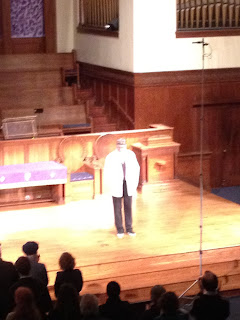 Above: Terry Riley glowing bow
Posted by Mark Pino On Drums at 8:53 AM 2 comments:

Ilitch is Kraut for Jam Band 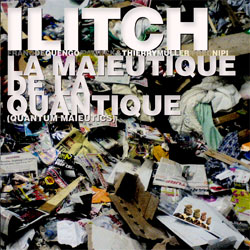 Disaster Amnesiac has been stone digging the Beta-lactam-issued CD by Ilitch, La Maieutique De La Quantique (Quantum Maieutics), and pondering the development of jam-based guitar music over the past several decades. I keep coming back to the issue of how deep a well the Kosmiche/Space Rock continuum has been for so long, how much of an influence, recognized (by some) or not (by many), the whole spaced-out guitar/electronics jammy vibe has been on musical culture.This CD is most definitely in that vein, and most definitely great.
Reading from Beta-lactam's web page, I am told that Thierry Muller has been doing this sort of thing since the 1970's. I seem to recall seeing his face on one of those cool cards that Galactic Zoo Dossier makes for guitar players, but up until now, that has been the extent of Disaster Amnesiac's hearing of the man.  I am happy to have heard his music.
The songs on the CD are live, in-studio improvisations, jammed out on guitars, electronics, synthesizers, and drums.There is most assuredly a Kosmiche feel to the tunes, but newer, post-Kraut influences, such as Zeuhl and Electronic/IDM are also heard. One of the more satisfying aspects of the Jam Band approach is the willful mixing of styles to form interesting aggregates, and Ilitch does this to great effect on La Maieutique.
Muller's advanced guitar playing leads and guides the proceedings. Seeing as that Ilitch is his band, this stands to reason. His playing sound is dark, very "electronic" and heavy (as opposed to, say, "Bluesy" or "Jazzy"), and quite big. He gets a lot of great sounds from his axe. He never turns the tunes into mere showcases for his chops, but his guitar does indeed wail and scream within them. That said, there is never a feeling of show off excess or the dreaded "taste". He builds up big walls of electrical sound and dredges up big chunks of grungy tone. His aesthetic approach sounds solid to this listener. He is also listed as playing keyboards. His style on keys is sounds just as raw as his guitar does. Not a lot of noodling from him there, either.
Going along for the ride with Muller on the top side of things are Fred Nipi on modular system noises and Patrick Muller on electrosonics and synthesizers. They provide all manner of cool electronic sounds and colors to complement Thierry's guitar playing. It's a bit tough to discern who does what with which, but the cool gatefold image of the CD cover shows a table with a ton of Moog, Skychord, and other systems' electronic doo-dads. Much distorted electronic whirring, shimmering, bleeping and blorping ensues throughout the recording. Needless to say, Disaster Amnesiac really likes these types of sounds.
Drummer Franq de Quengo does a find job of pushing the big jam rhythms when the tunes  need that, or utilizing smaller percussive coloration when they are called for. His drumming approach seems to draw from polyglot sources; at times one is reminded of Zappi of Faust fame, at others of FM Einheit or any number of Industrial found sound percussionists. His kit playing features a kind of loose, circular, polyrhythmic approach.  It is refreshing to hear a drummer who can stutter with the rhythm, as he does once or twice on the CD, yet get around it and continue on. Disaster Amnesiac is a big fan of honesty in music, and these captured, un-perfect moments, suit me just fine.
The arc and pace of La Maieutique are quite cool. The disc starts slow and contemplative, drives and rocks for the next half, and then cools off and chills out for the remainder. All the while, the listener is treated to the sounds of musicians listening to, and playing off of, each others' ideas. Despite being all-instrumental, La Maieutique has the feel of a story being told. It all sounds finely engineered, too. The sounds are big, bold, and nicely mixed throughout.
Disaster Amnesiac hopes that by describing Ilitch as a jam band he has not offended those who may be put off by such a description. I just feel like the band produces their jammy psych in such a was as to give dignity to the term. Ilitch quite simply kicks out the jams. The fact that they draw from sources so much different from the typical Jam Band pallet makes them that much more compelling.

Posted by Mark Pino On Drums at 2:28 PM No comments: