Disaster Amnesiac has been a fan of Arthur Doyle ever since reading Byron Coley's description of his sound as something akin to "gargling with Albert Ayler's razorblades". Doyle's tones are delightfully raw and skewed, and his albums never fail to blow my mind.
It's fitting that this music, so spaced out and inwardly directed (of course, you're welcome to come on in, the water's fine), was recorded in Sun Ra's home Magic City of Birmingham, Alabama.
Mr. Doyle is apparently not doing well right now on the physical front, and this downloadable document's proceeds are going directly to him. Buy it, and help out a Great American Artist!

Posted by Mark Pino On Drums at 7:20 AM No comments: 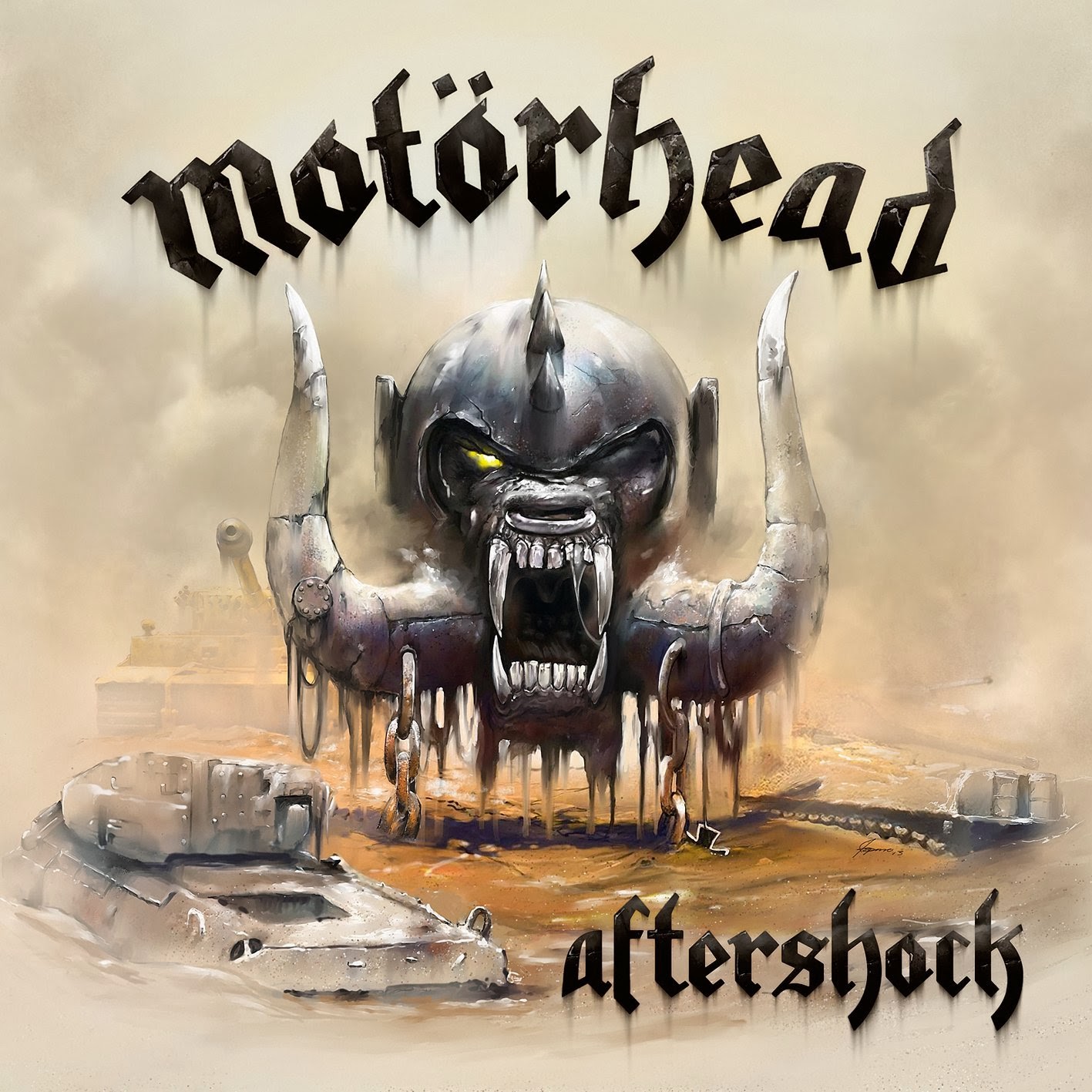 Disaster Amnesiac figures that if there is one band among the polyglot soundscape of Rock that unites everyone, it's just got to be Motorhead. I'd imagine that the first mook in any Rock crowd, from any of its various offshoots, to diss Lemmy and his pals, would get the business pretty quickly, and this is how it should be. The guy found the absolute perfect formula, refined it a bit, and has subsequently stuck with it for decades, inspiring and influencing pretty much everyone, all the while maintaining a genuinely cool and honest persona. Just as it's impossible to listen to Motorhead and not rock, Disaster Amnesiac figures it would be impossible not feel the presence of Greatness from Mr. Kilmister. Dude's just like that, and ever shall be.
I'm sure that every Motorhead fan will be pleased with the band's new offering, Aftershock, especially in light of Lemmy's recent health problems. If he's sick, it sure as shootin' doesn't show on this LP. It starts off with two great tunes cut from the classic Motorhead template, Heartbreaker and Coup de Grace. This template being heavy, amped up Rock-n-Roll riffs from Kilmister on treble-ey fuzz bass and Phil Campbell on wild leads (the man's been in Motorhead roughly five times longer than Fast Eddie!), while new guy (21 years) Micky Dee pushes them along with his stompin' double bass drum/open high hat thrashing.
Following these signature calling cards, the listener is treated to all manner of variations, from the Trower blue feel of Lost Woman Blues and Dust and Glass to the confrontational swagger of Silence When You Speak To Me and the piano boogie dance sleazy of Crying Shame, Motorhead put their stamp on all kinds of feels, and rock every damn one of them. Disaster Amnesiac hears Alice Cooper (the band) during the shuffled coda of Lost Woman, a Stoicism worthy of Marcus Aurelius in Silence's lyrics (Lemmy has always had a blunt honesty in his lyrical output). I hear Lemmy redeem a silly 1980's Scorpions lyric in Do You Believe (listen closely). Rare would be the person who makes "hell on roller skates" sound so kick-ass, but, Kilmister does just that, also on Believe. Sun Ra's Space is the Place seems to be quoted in End of Time's riff, and Motorhead pretty much quote themselves on Going to Mexico, but the band just has that kind of gravitas. They can pretty much do no wrong, owing to the refinement of their approach. Motorhead's music has an essential quality that allows them to put their indelible stamp on just about any approach that they care to try. Following up on all of these audible treats, Aftershock winds down with two more Motor-stomps, Keep Your Powder Dry and Paralyzed; I challenge any listener to not spool right back to the beginning and groove with the whole rockin' enchilada again and again. The album is just that great.
Things change, the center cannot hold, but through it all, year after year, Motorhead remain, Sphinx-like, sitting atop the Rock Music landscape.
Posted by Mark Pino On Drums at 9:21 AM No comments: 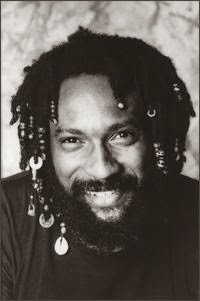 Disaster Amnesiac is very sad to hear about the passing of the great drummer Ronald Shannon Jackson. I am so sorry that I did not get to see him live more than one time.
Spring of 1992, I believe, at Kimball's West on Grove St. in San Francisco. There could not have been more than twenty people in the crowd that evening, but Shannon was a gracious presence as he climbed the staircase from the street, up into the club. I recall him looking at me, and saying simply, "hello!" Since that time, he's been a much beloved figure in my world.
Going forward, the man will be missed. One HELL of a drummer, who played with so many great names in music, internationally.
Farewell, Shannon.
Posted by Mark Pino On Drums at 5:47 PM No comments:

Disaster Amnesiac was made aware of L.A. Witch from this site (I tip my cap to you, sir), and I've been 'podding their sounds a lot lately. You've just gotta love the way they craft their tunes, the way that they swing with a down-tempo Avant Garage Rock simplicity. This does not sound like a stupid simplicity, mind you, but an effectively paired down simplicity that gives these three tunes an undeniable heft. They do not buzz pass the perception, but instead ooze into it as you listen, their Gothic Swamp sound sticking to the mind like gooey mud.
Opening track Get Lost last track You Love Nothing move with ballsy swing and buzzing chords, while the spooky ballad Heart of Darkness provides a acoustically strummed and chorus chanted link between them.
It comes as no surprise that sounds this great have been coughed up from L.A.'s La Brea tar pit of underground sounds. Disaster Amnesiac heartily encourages everyone to pay for this download. Perhaps L.A. Witch can use some of the proceeds to press up 7" copies, with the corpse painted kitty kat on the cover. I'd buy one just for that!
Posted by Mark Pino On Drums at 10:16 AM No comments: 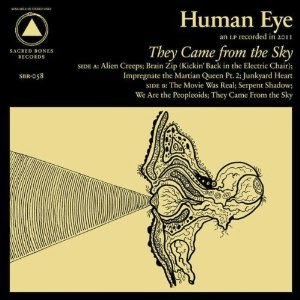 Scheduling conflicts prevented Disaster Amnesiac from attending Human Eye's recent show at the Hemlock Tavern, but I have been consoling myself with repeated listens to their most excellent 2011 recording, They Came from the Sky.
The album, featuring eight thematically linked tunes, seems to tell the story of an ontological encounter with some other, the story narrated by group leader Timmy Vulgar. What's really exciting for this listener is the aesthetic variance on display within this Alien Rock Opera. From ragin' Punk Rock 'n Roll on Brain Zip to heavily Psych Detroit on Junkyard Heart to Shel Talmy-like production on Impregnate the Martian Queen and We Are the Peopleoids and the Horror Punk equal to the Misfits' Die Die My Darling on the title track, They Came from the Sky's overall sounds cover so many exciting bases from within the Rock Music spectrum, all the while evincing Human Eye's distinct identity.
Vulgar's great, noisy, wah wah guitar playing leads the tunes. His riffs are solidly Psych in nature, propelling forward with Punk Rock energy, but colored with and infused by nice analog tones. They do not sound generic, particularly when he gets all Ron Ashton on tunes like Alien Queen and They Came from the Sky.His tones are juicy as they spray outward from his axe.His vocals remind this listener of classic manic front men such as Paul Stanley and Iggy Pop, even a bit of Chris D. at times, but, these are just touch stones. His unique story telling gives him a very unique presence, and his delivery does not sound affected, but compelling. Of course, his caterwauling wail is  helped by the originality of the overall narrative, too. He sounds believable. Disaster Amnesiac is convinced that he believes it, anyway.
Pairing up with Vulgar in the treble department, synthesizer player Johnny LZR give all manner of tripped out space sounds, providing deep space popping and 3-D depth to the tunes' overall architecture. He gets great Tommy Gear-isms going on Alien Creeps and (Hawk)lords it over The Movie Was Real with his sounds. You've got to figure that a story involving Outer Space Contact absolutely needs these types of sounds, and LZR does a great job of providing them.
Deeper in the rhythm section, drummer "Hurricane" William Hafer (what an apt name!) provides a rolling, rumbling beat. He's particularly effective when flaring around his kit, Moon style. He's on point throughout, pushing and pulling bassist Brad Hales with him, rocking the tunes' rhythms and then dramatically filling the sound with long tom tom set ups. Their tandem pacing is masterful on every tune.
Hopefully Human Eye will head back to the SF Bay Area soon, and hopefully Disaster Amnesiac will be able to get to that show. Until that time, I'll take much pleasure in spinning the strange apocalyptic alien sounds of They Came from the Sky, among other releases from this great Detroit band.
Posted by Mark Pino On Drums at 10:05 AM No comments: