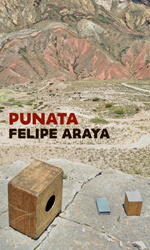 It was a few years ago that Disaster Amnesiac had a conversation with Bryan Day in which Bryan had told me of his plans to check out Noise and Experimental music in South East Asia. When I first pulled Felipe Araya's Punata tape out of its mailer, I thought that maybe it was one of the first fruits of Day's curiosity re: that region. It turns out that Araya hails from Chile.
As I've listened to the tape, it's hit me that I know very little about that region of the world, so perhaps it's better for my understanding than a possible release from the Pacific Rim. One great aspect of Punata is its first side, eponymous to the title, during which the listener is treated to 26 minutes of filed recordings from Bolivia. Presented in a raw, cell-phone captured way, Punata has similar vibes to many of the Bishop brothers' Sublime Frequencies releases: seemingly true to life vignettes of street-level societal action, with intimate conversational snippets. The most fascinating passage for this listener is one in which a marching band rocks out with abandon. That said, the seeming sound of windswept prairies of some sort towards the very end are compellingly spooky.
Disaster Amnesiac must admit to enjoying the b-side, No Punata, a bit more, as it features Araya's own musical pursuits. He plays the Peruvian Cajon, a quite simply structured percussive box with a large hole in its middle. Felipe experiments with the Cajon's tones and textures, utilizing extended techniques such as rubbing, sliding, kneading, and dropping it. It's really quite cool to hear musicians from different parts of the world experimenting upon instruments that are pretty much indigenous to them. Perhaps that's also something that Bryan finds really compelling? Also neat is the ancient sound of the Tarka, an Andean wind instrument that Araya pairs with Cajon to beautiful effect. No Punata ends with a rolling crescendo, during which Felipe sounds impressively unhinged and live, bringing things to a close with wild sawing action of a very loner nature. It's the sound of musician and instrument melding in the simplest, yet most intimate of ways.
After listening to Punata, one wonders what other sounds eh? Records has lined up, from parts far-flung, for the curious aural aficionado. If you're looking for raw sounds of Sur America, this cassette could be a fine place at which to start.

Posted by Mark Pino On Drums at 6:05 PM No comments: 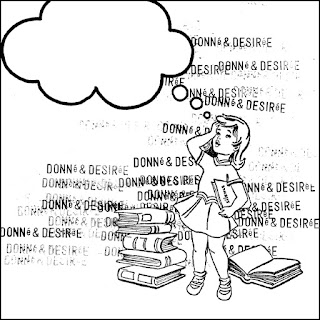 Of late Disaster Amnesiac has been drowning in a sea of great music. I'm surrounded by compelling sounds, and they're coming at me from any and all format: download, CD, vinyl, tape, self-recorded shows. In regards to describing and enthusing, the question is begged, "where to start?"
Three World Premiers, the excellent 2013 release from guitar/drums duo Donne et Desiree seems a fine place for that. Disaster Amnesiac has been jamming it primarily during commute time, and finding its sounds increasingly more compelling and awesome.
The first of Premiers's four tracks, Jackson Pollock Highway gets things going on a quick, silvery and somewhat aggressive tip, with drummer Donne leading the charge. His nerve beats scatter, clang, and talking while guitarist Desiree establishes a tight loop, upon which he proceeds to layer great lines of dissonant six string squall. This tune gets to the heart of its energetic matter with a deft quickness that could leave one breathless. Highway has a lot of the energetic hyperactivity evinced by the painter for whom it's named. Active lines abound.
Pacing changes on track number two, Bob Sees Himself Walking Towards a Formidable Abstraction. Here, D et D journey down into sonic valleys of relative quiet and introspection for extended periods of time before climbing up into denser energetic modes. Donne shows more great versatility here, extending his kit to include cymbal scrapes, shell hits, long rolls. His pacing really shines. Desiree matches these moves with a solid grasp of dynamics and space. His voices, often arising from silence, and cool for their resultant dramatic impact.
Similar to Bob's vibes Elephant In the Room. Indeed, it often seems to Disaster Amnesiac that these two tunes make up a kind of suite within Premiers. Oddly atmospheric vocals float relatively low within the sonic matrix; the first time that I listened at home, I had to check and see if I'd left a television on within another room. All that said, when this two get busier within the track, Desiree spills sonic spaghetti monsters all over Donne's skittering Euro-Free moves to more stunning effect.
Premiers concludes with the darkened ritualistic behaviors of Keep On Whaling, during which trumpet mouthpieces seem to be paired with kitchen implements for primal pace setting of a very introspective nature. One would do well to listen to it with headphones. Any type of other sound within the environment could distract from the late-night feeling that Disaster Amnesiac is picking up from it. Whaling's sounds mostly conclude a few minutes before the CD stops. Is this a nod to Cage, or am I going deaf? At the very last moment there's a none too subtle blink of sound, so be sure and have your stereo at a safe level for that final event.
Donne et Desiree are one of many great groups contained within the ranks at Norwegianism Records. Even though it's now been a few years since Three World Premiers has come out, it sounds really fresh to Disaster Amnesiac. Its blending of Free Jazz, Experimental Rock and all-out creative abandon, of both the busy and spacious varieties, is well worth seeking out. The physical disc is limited, but if those are all taken, one can grab the download for even more immediate musical satisfaction. Are there sequels out there?