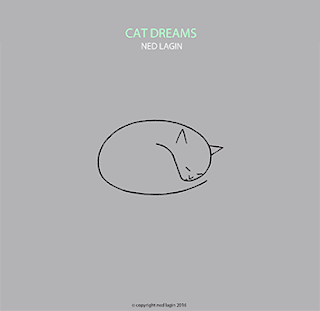 Talk about your dark stars: Ned Lagin has, at least for Disaster Amnesiac, been a quietly looming presence over any musings about the Grateful Dead, at least as regards their crucial early 1970's headiness. I've grown to see him as a kind of intellectual shadow for the group, a retiring thoughtful spark that at one time informed the brainier side of the band (Lesh/Garcia) to balance out the more commercial instincts necessary for the whole thing to work.
Do a Wikipedia search for him, and you'll find that his personal growth has continued on the trajectory that preceded his times with the Dead. Ned has the unique distinction of being a keyboard player that actually survived and thrived after a tenure with Jerry and Co.
It seems as though he stopped releasing music after the sublime Sea Stones of 1975, but has never stopped studying, learning and theorizing about it. That is, up until 2017 and the release of Cat Dreams. Disaster Amnesiac first got wind of this disc's impending release in late 2016, and had been seriously looking forward to hearing what Lagin had spent so long developing. The one predictable thing about Ned Lagin is that his music will sneak up on the listener with all manner of sonic surprises, which is most definitely the case with Cat Dreams.
The CD's over all theme, as the title suggests, is a musing on the lives and love of cats. While there are no lyrics, the tones and timbres do suggest the quirkiness and surprise of the feline species. Various manners of music making are utilized. Songs such as Heartbeats (Tyler's Adventures) and Nimo's Song feature fluid electric Rock band jamming. The former features really intricate double drum set chatter from Celso Alberti and Kevin Hays, while the latter has an incredible guitar solo statements from Gary Vogensen and Barry Finnerty. Lagin leads this band action with subtle synth shading and melodic piano riffs. Also of note on Heartbeats is the fluid, almost lead bass (sound familiar 'heads?) from Dewayne Pete. Most of the members of the group on these two songs also appear on the fun, swinging triptych The Big Cat Dance. This tune's three cuts start with the bouncing Carnivale/Mardi Gras strut of Cat Samba, which features some fun scat singing, electronically processed by Ned and more crisp interaction from the drums tandem. This one swings like crazy. It's followed by the warbled Appalachian moonshine of Catnip, which is notable for its skittering banjo leads, played by Ned on his keyboard synth. Disaster Amnesiac has marveled at its authentic sound, along with the gritty harmonies he gets. I mean, it sounds just like a banjo! The Americana vibe continues for Cat Licks, with the romping violin of Dick Bright leading the charge and Barry Sless taking it up on pedal steel guitar while Lagin utilizes his much considered synth tones to meet up and intertwine with them. The Big Cat Dance fulfills the promise of polyglot American Music, pulling from any and all pockets of our rich musical culture. Listen, groove to, and marvel at it.
Cat Dreams being a release from Ned Lagin, one can also expect to be treated to his sublime Electronic Music side. On tracks such as The Creek, wherein he coaxes more acoustic-sounding timbres from his rig, Sun Cats, with its percussive chiming ostinato, the dark abstraction of Starlight or the sunnier beams of Moonrise, Ned provides great examples of this facet within his greater vision. The fans of his earlier electronic aesthetic will find plenty of sounds to love within these pieces.
Along with all of this other pursuits, Lagin seems to have put in serious time studying Native American flute. Another trio of tunes, Night Sounds, Night Journey, and Night Spirits, have him in duet with Alex Maldonado. These three have all of the shamanistic atmosphere that the sparse sounds of the wooden flute is capable of conjuring.
Perhaps the best songs on Cat Dreams are the emotionally charged Someone's Baby, Teddy Sings a Love Song (How His Heart Sings) and G's Star. All three of them have Disaster Amnesiac running to memories of beloved felines. Baby has Ned playing sweet violin tones on his synth, in duet with Finnerty; this duo continues their responsive conversation on Teddy, this time with Ned on cello sounds. G's Star packs possibly the most emotional wallop with its ringing electric piano sounds. If music is the fruit of love, these three songs drip with its bittersweet juices. Hug your partner, call your mom, or pet your cat today, for life is truly short.
In the liner note for Cat Dreams, Ned writes that it was a purely d.i.y. affair. All of its songs were recorded in non-studio settings, and all of them are first takes. While its songs have the living feel inherent to this approach, credit must be given for Ned's clear mix and sound capture. All of the instruments are present, and there is nothing slapdash about them.
Disaster Amnesiac hopes that Ned Lagin doesn't wait nearly as long to produce a follow up to Cat Dreams as he did for Sea Stones. That said, there are pretty clearly at least nine lives' worth of rich, engaging, and enjoyable songs on this much awaited new offering from one of the truly compelling figures in Psychedelic Music. How's about a live show at Marin Civic Center, Ned?