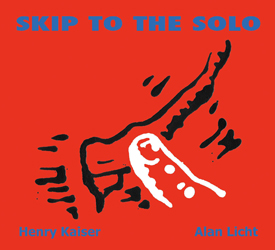 Attention electric guitar fans: Public Eyesore, Henry Kaiser, and Alan Licht have prepared a recording that Disaster Amnesiac suspects will be seriously up your sonic alley. The stated template consists of a rhythm section laying down a somewhat simplified rhythmic/chordal progression, upon which Kaiser et al can dispense with everything that leads up to the solo space and just get to it. Again: fans of electric guitar playing will find tons of enjoyment on Skip To the Solo.
The disc's 14 tracks are all formatted in a similar way that Zappa's Shut Up And Play Your Guitar discs were: brief spoken Dada leading directly into the quartet as they get down to the business of jamming.
And oh, how they do this! The rhythm guitar/bass guitar section, made up of Mikko Biffle along with Licht and Kaiser, lay down chordal sketches while drummer Rick Walker plays in an understated style that is both simple enough not to interfere and complex enough to be compelling to the the soloist and listener. Skip's tunes all swing like crazy in this way. As Disaster Amnesiac has listened, the thought has occurred to me that this music's rhythmic richness makes it ideal for either deep, focused listening, or as more of a sonic backdrop for working or partying. It has that kind of broadness to it.
Of course, the whole point of this set was to feature the electric guitar as a soloing instrument, and on that front it succeeds wildly. Standout solo action for me: the hard Sci-Fi chop and slice of File & Rank, the cutting Psychedia of Variations On The Jerry Garcia Secret Chord Progression, the spacey Fripp-ey tones of Rendezvous In Space, and the shiny melody of Ask Me About the Dorian Mode. These are just Disaster Amnesiac's picks, though. Every track on this one has compelling tones that are tremolo'ed, reverb'ed, even talk boxed into the head bliss zone for guitar solo maniacs.
The way this band gets down to the point of ripping out fun and fascinating instrumental music is beautiful. Again, if you're any kind of a fan of personal expression on electric guitar in the form of soloing, you'll truly want to seek out Skip To the Solo. Your ears will thank you for the effort.

Posted by Mark Pino On Drums at 3:52 PM No comments:

Swim Through Darkness: My Search For Craig Smith and the Mystery of Maitreya Kali; Mike Stax, Process Media 2016 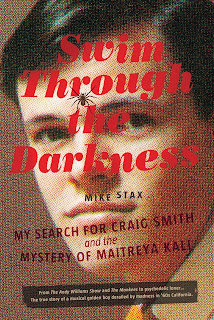 In some way, it feels almost corny to use a line from what's become one of the somewhat annoying "Classic Rock" staples to introduce the subject of Craig Vincent Smith here, but, honestly, this line kept floating to the fore of Disaster Amnesiac's perceptions as I plowed through Mike Stax's book about the man, Swim Through Darkness: My Search For Craig Smith and the Mystery of Maitreya Kali.
Still, one overriding impression that comes across, at least to this reader, is the overwhelming amount of strangeness, which quite clearly overflowed into a life lost in the darkened waters of Los Angeles alienation, that emanated from Craig Smith. Almost every interview subject recalls moments during which their interactions with the man were colored by an intense, frightening otherness, darkened energies that more often than not keyed their flight instincts to "take off".
Eventually, they all did.
Swim Through Darkness is Stax's attempt to tell the tale of a talented man who was initially likely affected by certain neurological challenges that were exacerbated by a tragic run-in on the Hippie Trail in Afghanistan. Smith seemed destined for a prosperous life within the Los Angeles entertainment world: his list of hep early to mid 1960's contacts was impressive to read. As mentioned, this often described "Golden Boy" seemed to evince some strange vibe that served to put people off even within that sun shiny world. As Stax spins the story further, what were initial hints at the tragic aspects of Smith's life become more and more apparent, more and more open as he became less and less moored within the shared reality of those around him. What eventually emerges from the tale is a lonely shell of a man, almost a ghost, really, inhabiting the streets of Van Nuys and Santa Monica, seemingly completely cut off from "reality" all together. A stranger.
It's to Stax's credit that he stuck with the story, and to read about the redemptive action that he finally took, revealed as the book closes, alone makes Swim Through Darkness eminently worth reading.
As with all of his articles for Ugly Things, Mike's research is highly in depth, and his treatment of the subject of Smith is incredibly moving.
Read and remember: be kind to strangers if at all possible. It seems likely that there are more than a few "Maitreya Kalis" shuffling about in our towns and cities. Their stories, while likely not as initially shiny as that of Craig Smith, should be equally honored within the consensus. Thanks Mike, for the reminder. Hopefully you found a fine place for that box. 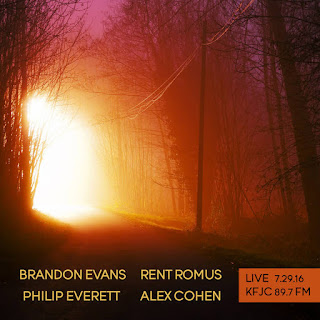 Brandon Evans's recent swing through the San Francisco Bay Area seems to have been a success. An appearance at Outsound New Music Summit with a workshop and a show, a large ensemble recording at Gold Lion Arts in Sacramento, and this set at the venerable Wave of the West, KFJC in Los Altos Hills.
Featuring what sound like four or five separate improvised micro-pieces, strung together into one long suite entitled improvisation, Live KFJC 89.7 FM has all kinds of sounds and interactions to be enjoyed by the Improvised Music fan.
Leader Evans gets great high pitched squeals and squalls from his alto and sopranino saxophones, while Rent Romus adds to the winds mix with his own signature riffs. Particularly compelling are Rent's post-Ayler lamentations and double horn harmonizing. The two sound great together; they were close musical mates within the early 1990's SF Jazz scene, and it's clear that their simpatico remains, and joyfully so.
Guitarist Alex Cohen's clean tones display a great sense of Jazz comping; his guitar often seems to take on a solidly supportive, almost bass-like rhythmic role within the quartet,  and when he solos he sprays great clusters of notes all over top of the horn harmonies.
Multi-instrumentalist Philip Everett adds some of his surreal clarinet bleats and really great minimal kit percussive action. His popping rolls on a snare drum serve to move the music, and they are spiced with bursting interjections on small cymbals and bells; Disaster Amnesiac finds his approach instructive and very cool. Philip can do a lot with a little!
The overall feel of Live KFJC, obviously on account of these fours' great listening and playing skills, is tight and focused, with what strikes me as a great blending of Jazz, Improvised, and New Music influences. Any fan of these streams would do well to click on over to Brandon Evans's ever-expanding bandcamp page and dig in to this one.
Lastly, how 'bout that excellent cover imagery? Mysteriously cool!

Posted by Mark Pino On Drums at 1:10 PM No comments: