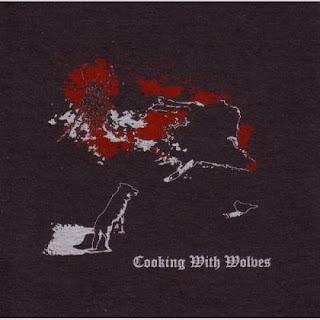 A recent trip down to Venice, CA had Disaster Amnesiac checking out a small, funky shop on Venice Blvd. I'd already picked out a few slabs when Cooking With Wolves, a 2008 release from Wolfmangler, a mysterious, Black Metal project that seems to have originated in Poland caught my eye.
Admittedly, it was the crazy script of their logo that pulled me in. Adding to this fascination was an online review that I read, essentially trashing the LP as non-musical conceit and a total waste of time. Pretty much anything that gets that kind of derision piques my interest.
Having listened to Cooking With Wolves, and really having enjoyed its Blackened sounds, Disaster Amnesiac must strongly disagree with the naysayer.
Starting off with a Cole Porter tune, All Of You, Wolfmangler sets the tone of the release with somber cello riffs that feature heavy, dragging bow techniques and gruffly whispered vocals. Google the lyrics to this 1954 song, and you may see how and why it fits within the sentiments of a Black Metal set.  It's a fascinating connecting of the pathos of Jazz with that of later forms. Disaster Amnesiac really loves the sound of what I believe is the cello being struck for percussive accenting, too.
Traditional Polish song Czerwony Pas is up next, and it sounds perfect for the type of treatment that Wolfmangler utilize. Its ascending chorus fits really well with the vocal technique as the relatively simple Folk melody chases behind it. Cool arco bends from the cello give feelings of unease; perhaps you're not welcome in this village, stranger.
Heading back across the Atlantic for track three, Wolfmangler takes on Hammerstein and Kern's 1927 Ol' Man River, where Disaster Amnesiac is hearing electric bass along with the cello. Originally a show tune, it becomes on Cooking With Wolves a powerful track of Doom Metal. Instead of seeing the languid Mississippi as I've listened, I've seen freezing ice floes in the dead of winter in some Eastern European backwater.  The cold Minimalist tones continue almost without pause on Beata Z. Albatrosa, which, like its predecessor, floats coldly upon the whispered vocals and sparse cello scrapes.
Disaster Amnesiac seriously wishes that the vocals on side A's last track, Compost With a Grudge, were more understandable to my ears. They are listed as being sourced from "various journalists". Given its title, it makes me wonder if these words are purely taken out of reviews of Wolfmangler's music. Are they pro or con? Supportive or dismissive? I'm leaning more on the side of the latter, but who knows? All that I know is that the vocals become pure texture to my ears, which is never a bad thing for this listener either.
Side two of Wolves gets its start with Zegar, as more mournful cello and bass guitar pairings entwine with what Disaster Amnesiac feels is the most gravelly, spitting vocal performance of the LP.  The vocals linger down into the bowel of the singer before being dragged, slowly, up and out into the air.
More traditional Polish tune-age is presented with Szwolezerowie, which brings back the percussive cello body knocks, huge mid-song spaces of vertigo-inducing Minimalism, and vocals almost...almost sung, as opposed to growled or burped, and great melodic feels that Wolfmangler seems to be really able to pull from their tradition. Surely, this is Black Metal success.
Coooking With Wolves concludes with another pass at Porter, thing time 1934's (You'd Be So) Easy to Love, listed without the parenthetical portion. After a pretty extended opening portion, in which acoustic bass and cello twine and twist around the melody, the vocals come in with whispered intimacy. This track feels pretty close to Jazz for this listener; Disaster Amnesiac can imagine similar versions of this standard coming from the haunted minds of Arthur Doyle or Don Ayler.
One thing that you've just got to admit in 2018 is that Metal can produce just as much Experimental Music as any other genres are capable of. Disaster Amnesiac finds bands such as Wolfmangler to be incredibly fascinating and enjoyable due to this reality. Cooking With Wolves, with its icy Minimalist take on the song form, filtered through Black Metal aesthetics, is a fine example of that type of action. Anyone know of live tracks from this group that are out there?
Posted by Mark Pino On Drums at 5:45 PM No comments: 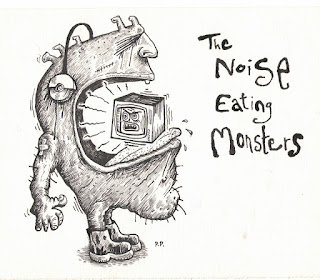 Installment number two from Muteant Sounds has Disaster Amnesiac moving and grooving to the sounds of Noise Eating Monsters, a UK-based group of quite significant pedigree. The three members of this improvising trio have played with all manner of big name players, and one can most definitely hear the confidence on their self-titled release from last year.
Noise Eating Monsters starts off with the trio of guitarist Alex Ward, baritone sax player Tim Hill, and drummer Alex Thomas marking out their respective spaces on Crunch Time. What's fascinating to this listener is the controlled manner with which the trio builds up the tune's riff, each side of this triangle slowly stretching out for a few minutes' duration until such time as they collectively blast off into the sonic thickets of collective sound production. Ward seems to favor an minimal set up: if he's using pedals, I can't tell. Thomas has some seriously pinpoint accuracy in his grooves, and Hill's richly melodic bari sound supplies all kind of invention. Noise Eating Monster show themselves to be a powerful trio, right off the bat.
Rumble starts off with the group engaged in quick, chattering interaction before Thomas sets up a stomping tom tom pattern which is quickly grabbed by Ward on great rhythmic accompaniment. This groove sends Hill into a prolonged sax musing. Disaster Amnesiac keeps thinking about the original No Wave groups as I've jammed Rumble. The shredding guitar rhythms, paired with the big groove and reedy yelp keep pushing the perceptions to that thought. It's three times longer than Link Wray's version of Rumble, but equally greasy.
Ward opens up Aether with chilly guitar harmonics and glassy slides as the drums and sax comment somewhat sparingly. The Monsters dip down into some fairly dramatic, almost quiet interactions here before building up another monster free groove, driven by Ward's tight strumming and Thomas's exacting sticking. There's more of that great, clean six-string atop press rolls, both of which the push the sax into spiraling declamations.
Tim Hill takes the lead on Djin Din, coaxing ripped and warbled tones from his sax as high end piercings stab out from the guitar and the cymbals shimmer. One of the tags on Noise Eating Monsters page at Muteant Sounds is "garage Jazz", and Disaster Amnesiac can see why it is while listening to Djin Din.  The track has that kind of Punk Rock edge that brands it as something bubbling up from the non-mannered feels that are so much more easily accessed within those out of the way places. This may be the most traditionally heavy piece on this release. Noise Eating Monsters really blaze here as they slice and dice with intricate interactivity.
Album closer Monster Munch gets chewed up with more of that great, quickening riffing from Ward. He gets great low tones, too, as Thomas sticks out circular 16th note flurries and Hill preaches apocalyptic in the fury. Disaster Amnesiac hears the Thrash roots from the drummer's Bolt Thrower tenure on Munch as he pushes much air around his kit towards its conclusion.
Noise Eating Monsters, with their tight interactive improvising, stripped down aesthetics, and energetic sounds, have a great release under their belts with Noise Eating Monsters. It's meaty power trio music that swings like mad as it packs great big improvisational punches.

Posted by Mark Pino On Drums at 3:18 PM No comments: 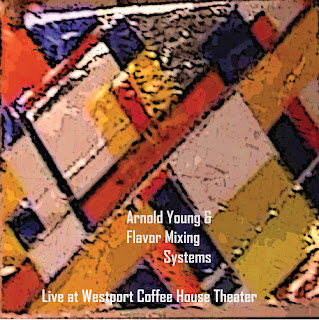 Recently a missive came out at Muteant Sounds Facebook page: "...reviewers, we'll send you stuff to review...." Needless to say, it took about a day of consideration before Disaster Amnesiac was hitting them back via private message, offering my services. I've bought their product before, mind you, and most definitely will again. That said, it was an offer that I couldn't pass up. Muteant started me off with Arnold Young & Flavor Mixing Systems Live at Westport Coffee House Theater. Disaster Amnesiac has been listening. Here's some of what's been heard.
Made up of a sprawling three pieces which clock in at a little bit south of 45 minutes, Live at Westport starts off all jungle style with Bamboo Interlude Texas Driveway Holding Pattern. Wooden flutes chatter, flutter, and scrawl as all members of this quintet dive in together. Bass guitarist Henry Fording Eddins picks up the harmonics and summons in the sax of Russell "Fairweather" Thorpe and really cool bowed upright bass from John Nichols. Drummer leader  UN RA Arnold Young swiftly joins in the fray, and suddenly the listener it transported to the American mid-West as the group improvises in a manner that sounds quite AACM or BAG in its approach: lots of space within the interplay, marching rhythms, scattershot percussion leads and lots of clearly attentive listening. A bit deeper in, trumpeter Nick Howell coaxes great big gut bucket bleats from his horn as he mixes things up with Young's drumming commentary. Bamboo Interlude drifts into a Bluesy ending section, with all members going collective yahoo as they lose the holding pattern and set their ship out onto a deep, muddy river of composed-sounding jam.
The second piece, Outerlude Joshua, continues with said mid-Western feel as Eddins, Thorpe and Young languidly wrap their tones around each other. This relaxed feel allows for an opening through which everyone begins to collectively strut, with Young pushing all hands on deck and into some really satisfying playing, Howell and Thorpe doing a call-and-response dance as the basses clip and click in their lower registers. Joshua has the kind of spaciousness that has Disaster Amnesiac's head spinning in a gooey bliss, and as the individual solos commence, I'm all ears. Young's accompaniment is tight and tasty as he weaves with Eddins and Nichols. This trio warps and wraps their sounds in all manner of stop-start zones, and the horns respond accordingly, moving up, down, and around their registers as they make their statements. Eventually, things boil down to duo statements before the collective comes roaring back to walk things home by way of whispered goodbyes. Twenty four minutes of highly enjoyable intimacy. It's what you want from your Jazz, yes? Well, it's surely what Disaster Amnesiac wants from mine.
Live at Westport Coffee House Theater concludes with a short piece, FlavorMix Drums, in which Young gets his Funk ya ya's out as the basses push him and the horns shout their encouragement. He takes a short solo, stops abruptly, almost as if he realizes that he's suddenly alone, and that's it for the set. Don't buy the modesty, though, he's kicking ass as he stomps out his changes.
Fat, hip, and juicy, Arnold Young & Flavor Mixing Systems Live at Westport Coffee House Theater is a fine set of grooving, spacing, and all out enjoyable slice of Heartland Jazz, coming at the listener real and hot. Fans of the polyglot truth of the music will want to drink from this mixture.
Posted by Mark Pino On Drums at 6:53 PM No comments: