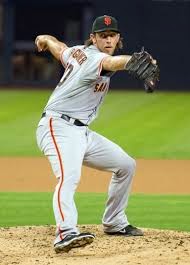 Improbable. That's the best word that Disaster Amnesiac can find in regard to the San Francisco Giants World Series Victory.
After watching the team get off to an incredibly powerful start in April and May, their fans subsequently had to endure a June Swoon of epic proportions. Said Swoon had the team essentially stumbling through the rest of the summer and then lurching into the playoffs.
Improbable victories against the Pirates and the Nationals, both heavily favored by the national media, pushed the suddenly scrappy Giants into the NLCS against manager Mike Metheny's Cardinals. Surely, their luck would run out there, no?
No, in fact, if luck was indeed the main dynamic at play, it did not. The Red Birds were also dispatched by the Improbable G-Men, who now stood atop the heap of the 2014 National League, poised to take on America's New Team of Destiny, the American League Kansas City Royals.
Which was where Madison Bumgarner took over. The acknowledged ace of the Giant's pitching staff put in an historical effort, essentially carrying the team into baseball lore, with some fine help from so many members of the team and the Hall of Fame astuteness of manager Bruce Bochy. At the start of 2014 post season, it was only a few die hard Giants fans that were aware of and believed in the Improbable Champs. Disaster Amnesiac must admit to being highly skeptical, especially after Game 6's ignominious drubbing, but, now, here they are, World Series 2014 Champions.
Disaster Amnesiac would like to congratulate the 2014 San Francisco Giants and all Giants fans! What a fine ending to this manically wild season! It just goes to show that anything truly is possible.
Posted by Mark Pino On Drums at 7:11 AM No comments: