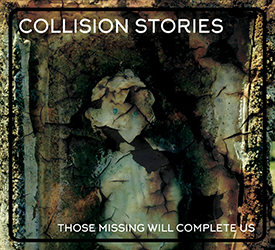 The earliest memory that Disaster Amnesiac has of Industrial Music enjoyment: being entranced by the hypnotic back and forth of the wiper blades on my mother's Volvo as we zipped through rain storms in suburban Virginia. The sound and rhythm of those blades most definitely primed me for an appreciation of experimental music. It seems to me that one must be willing, when listening to Industrial or Experiment Electronic, both of which fit nicely as descriptors for Collision Stories new release, Those Missing Will Complete Us, to embrace the type of pure sounds that emanate from the machines that surround us as music.
Disaster Amnesiac mentions all of this not as some sort of qualifier for approval, but simply because Collision Stories do such a fine job of making compelling music from within those stated rubrics. Made up of ten interlinked parts, running continuously for a bit over an hour, Those Missing features all kinds of great, mysterious sound interactions between a quartet of highly skilled improvising experimenters. Collision Stories are making true band music, but have simply dispensed (for the most part: Disaster Amnesiac has heard a few guitar strings in the mix) with the usual instruments, instead jamming out group interactions more with electronic patches, stand-alone pedals, contact mic'd stuff, and Public Eyesore Records founder Bryan Day's fascinatingly singular instrumental creations. The disc's ten tracks feature disciplined movement as the group wends its way with a quite sublime mixture of focus and patience, through highly intriguing sound spaces. Themes arise from one player, the rest of group, as they are listening, are able to add to and comment on these themes; this interaction builds up layers that rise and move with a nice organic feel. Additionally, its engineering, so crisp and clear, really allows for deep appreciation these feels.
This is band music in principle and act, top flight Industrial/Experimental band music. As such, it can complement the sounds that whirl around those of us living within the Grid, or, presumably, entertain those that may have the luxury of not having to do so.
In Disaster Amnesiac's case, Those Missing Will Complete Us satisfactorily fits into my mental imprinting, done long ago, for appreciation of the type of action offered from Collision Stories. I guess one could miss out and complete Jorge Bachman, Michael Gendreau, Mason Jones and Day, but, as for me, I'm glad to have broken off a piece or two.

Posted by Mark Pino On Drums at 5:17 PM No comments: 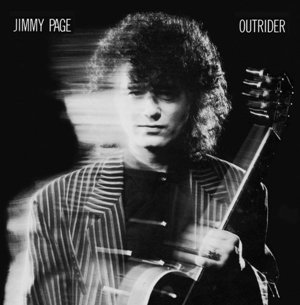 In all candor, Disaster Amnesiac is truly surprised that this LP has come up for describing and enthusing here. Travel back a few weeks, and as I was digging through a box of compact discs for some good music to hear, it practically popped out of that box. I can't recall when or where I found Jimmy Page's 1988 Outrider, but there it was, practically demanding to be played now. Most assuredly, Disaster Amnesiac places a ton of credence on intuitive leaps of this type, so promptly into the disc player it went.
Damned if the shiny little beast hasn't all but stayed put since that time. Made up of nine tracks, all save one composed mostly by Page, Outrider has a kind of understated yet powerful presence (take the pun, it's fine...) that this listener has been enjoying greatly.
It starts off with the hooky Wasting My Time, a charged and chooglin' slice of prime Hard Rock meat that evokes a very "American" feel for me, very Heartland Hockey Hall, especially in the vocal department. Disaster Amnesiac keeps thinking about 1980's copies of Heavy Metal and muscle cars as this tune rolls over my perceptions. A Google search revealed to me that singer John Miles is in fact English, but damned if he ain't right up there withe Lonesome Dave Peverett in the "out-Yanking the Yanks" league of British rockers. Can Disaster Amnesiac salute you with Old Glory, Mr. Miles? Boss rhythm section strut from Jason Bonham on traps and Tony Franklin on the bass here. The former meshes the swagger of his immortal pop with his own somewhat lighter touch and great ride cymbal bell tapping. Jason doesn't have quite the same weight of John, but, then, who possibly could?  Franklin holds it all together, wisely tucking in between Bonham and his uncle Zoso. Page riffs swooping all atop this action, making great swooping sounds and delivering a fine, colorful solo. If you're at all a fan of Jimmy's guitar playing, your ears will feel nicely treated. Miles remains as the singer for Wanna Make Love, again reaching the kind of high Heavy Rock notes that are so definitive for the genre. The lyrics may seem a bit corny Post-Punk, but surely the little girls understood. Cynical Rock dudes would most likely forgive the vocal affront as Jason's slow hat groove pushes all kinds of trippy tremolo from Page before a leading into a quick two step coda. In Disaster Amnesiac's opinion, the two opening tracks of Outrider are bona fide Hard Rock highs of the 1980's. Here's to hoping that this LP eventually outstrips Appetite for Destruction or whatever Aerosmith was offering concurrently with it.
Page wisely ditches the vocals for Writes of Winter, wherein bassist Durban Laverde joins in the fray with Jason. Their interplay has Disaster Amnesiac thinking of Motorhead and their NWOBHM spawn as they lock street-wise triplet-ey. Jimmy's gorgeous tones and cutting leads evoke the majesty of the Houses of the Holy era, heavy Psychedelic Rock colors leaping off of the strings and out through his amps. All of this leads into what was at the time An Event: Robert Plant joining in with Pagey for a rollin', rockin' dose of their singular Zep-a-Billy on The Only One. Plant's lewd alto is all kinds of grease and suggestiveness. Dude could probably have unlocked Tipper Gore's chastity belt with this number. Page is up for it, too, strummin' mental and wild with his old ice and snow pardner. Jason's a dead ringer for his dad here, so maybe Disaster Amnesiac was mistaken a few sentences back. Felix Krish played the bass, but one has a bit of a hard time finding him. Spending time around Golden Gods is never easy for mere mortals, that's for sure.
After Percy's fine appearance, Page again astutely chooses to go the instrumental route, with the rousing Liquid Mercury. A huge, anthem-style riff leads into more of his expressive, singular tones. One really must marvel at the ways in which he infused Country sounds into the Heavy template. Prog King drummer Barrymore Barlow subs for Bonham on this one, fusing a bit more choppy fuss with solid time playing. Krish gets a bit more of the limelight in this spare trio action. Disaster Amnesiac loves these type of short instrumental rockers. This one may be the best of its type from the major label economy since the Joe Perry's Project's Break Song.
Outrider's feel gets a substantially more Bluesy on the rest of the set. Vocalist Chris Farlow, another British singer with a lengthy c.v. evokes the Muddy Waters sense of class for the tracks Hummingbird (written by Leon Russell), Prison Blues, and Blues Anthem (If I Cannot Have Your Love...). His tenor, delivered clear and articulate, lacks the dramatic vibes from Miles and the raunchiness of Plant, but is pleasingly "male" in its timbre. The rhythm section of Bonham, Krish, and Laverde keeps things somewhat more simple and restrained on these tunes, but Page delivers great solos on Hummingbird and Prison Blues. It's as if they had been supping tea with Roy Harper during Farlow's stay at the Berkshire studio where these tracks were laid down. Definitely evocative of the Led Zeppelin III era. Blues Anthem winds Outrider down with a sweet, almost Garcia-like solo from Page before a very "Euro" anthem-style ending. Sandwiched within this Blues troika is another lovely instrumental, Emerald Eyes, full of the longing sounds perfected by Jimmy during the Physical Graffiti era as he's joined again by Barlow's subtleties. Its layers of guitars, glistening, shining, and melting away that really make the song.
There are some serious highs from the strings of Page all throughout Outrider. Disaster Amnesiac is certainly happy that I stumbled upon this disc at some point. Its vibes have aged exceedingly well, and I recommend it as a hidden gem of 1980's Rock in general and of Led Zeppelin-related output in particular.

Posted by Mark Pino On Drums at 7:38 PM No comments:

My pal Matt Davignon invited me over to do a guest episode on his Ribosome Radio podcast. While Mark Pino was the person invited over, there are definitely Disaster Amnesiac shades to this occurrence.
More describing and enthusing coming soon!
Many thanks to Matt for being such a friendly host.
Posted by Mark Pino On Drums at 9:51 AM No comments: