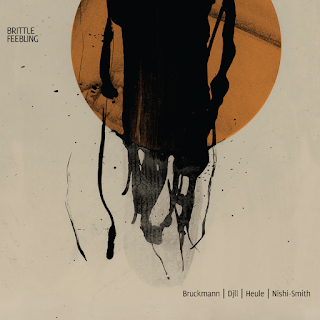 Recently, another musical surprise came to Disaster Amnesiac by way of Humbler Records in the form of Brittle Feebling, a recording of improvised music from the quartet of Bruckmann/Djill/Heule/Nishi-Smith.

These four first call SF Bay Area musicians present five pieces of collective improvisation that stretch their respective instrumental techniques and vocabularies to a great degree. As I've listened, I've thought a lot about the methods of tonal extension that they utilize throughout Feebling. No doubt, there are plenty of examples given. Sounds scrape, and burble, and whoosh, and bubble, leaving the listener to ponder "who did that?" Oboe becomes a theremin. Koto morphs into a squirrel. Trumpet shows aspects of synthesizer control. Floor tom becomes viola. The sounds that emerge within the group playing on this set are pretty remarkable to one who appreciates adventurous musical exploration, that's for sure. One never quite knows which instrument is playing what, and that it's really quite pleasurable to experience. Concepts such as "chops" get left in the dust as these players dig deeply into their individual sound worlds. These worlds then mesh into sublime musical omniverse.

Rhythms get extended way past meter, into more subtle, long form pulses and episodes. This feeling gives Brittle Feebling a very trance-ey character. An attentive listener could feel as if they are peering in upon a very private conversation between people who are discussing matters of subtle intimacy. Any kind of "rush to the finish" is eschewed, as instead Bruckmann/Djill/Heule/Nishi-Smith allow the pace to de dictated within the action of listen/respond/listen. This group is not marching, but swimming.

Disaster Amnesiac dearly wishes that I could see this great group within a live setting. Perhaps at some time in the future, they'll do a release show for Brittle Feebling. Until that time, this document of high-end improvisational thought/music will serve nicely at such times as the need for hearing that type of musical approach arises. Find it and focus!