Youth Chairs-Everything; Self released via Bandcamp, 2016 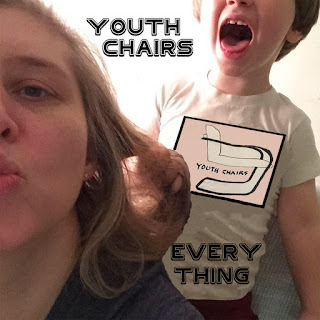 You just have to love the way that things can come full circle. Right around the turning of the New Year, Disaster Amnesiac contacted drummer David Winogrand after being out of contact for several years. More significantly for David, he mentioned that he'd re-connected with his musical compatriot from the early 1980's, Larry Jacobson, in a chance meeting in Los Angeles in 2015.
Larry and David, along with bassist John Richey and singers Kim Lori Dart and Gabriele Morgan, and keyboard player Bruce Wagner, played together in the band Youth Chairs. The group, which lasted from 1979 until 1981, came to fruition during an immensely creative time for music in Los Angeles. Disaster Amnesiac needn't rehash those particular details, but suffice it to say that Youth Chairs sound is full of  the energy that was flying around the country generally and in Los Angeles specifically at that time.
That sound is a Punk Rock infused Pop Rock. As Disaster Amnesiac has listened to Everything, last year's digital release of the collected demo recordings from Youth Chairs, I've marveled at the strength of their songs' hooks. Jacobson, the main music writer for Youth Chairs, sounds as if he was a student of earlier masters such as Lennon/McCartney, Brian Jones, and, most pointedly, Pete Townsend. Tunes on this collection such as Everything and I See Lisa, and You Is Time move with guitar-driven melodies rooted within the Rock 'n Roll eras previous to Punk Rock, but are driven by the energetic crackle of that then-current force in musical culture. It's to his credit that he shaped these influences into a really fine personal approach that shines in these songs. It's really a pleasure to hear and feel his hooks bouncing around the mind, during and after listening to Youth Chairs. Why these melodic skills did not propel a tune such as You Break Hearts to the Pop charts of that time is beyond me.
To bolster the creative melodies and hook emanating from Jacobson's guitar, Youth Chairs rhythm section shows some seriously snappy interaction with it. Bassist John Richey and drummer David Winogrand (or Tom Brown on four early tracks) provide solid sonic ballasts upon which the songs' changes cruise quite effectively. Dig on the liquid low end bass action on Grownups and Beautiful Music, paired with stompin' tom toms and crisp cymbals, their tight tandem on a cool cover of Paint It Black, and their alternating chugging and tight moves on Army Army for evidence of their simpatico. Their playing is perfect for this type of material.  Bruce Wagner fleshes out certain gaps within the treble registers, accenting 1960's-style with chiming keys on Girls In Cages and solid chords playing on Everything. Again, with playing like this, within this type of Pop matrix, it's puzzling as to why Youth Chairs made such little headway, especially as they were positioned so near to the heart of major label economy. Is Disaster Amnesiac just being naive here?
In the vocal department, Youth Chairs featured Kim Lori Dart to start with, later switching to Gabriele Morgan. Dart seems to have written the bulk of her lyrics, which are delivered in an energetic, somewhat "naive" manner; they strike Disaster Amnesiac as being Garage-sounding in their timbre, sort of "first band" in tone, if that makes any sense. This delivery fits well within the group's energetic framework. Even at my well-into middle age state, they're very compelling in their early adulthood concerns: jobs, post-high school angst, weird people and their issues are all dealt with in tunes such as All Things To All Men and Grownups. Morgan's voice sounds a bit more trained and formal than her predecessor's within the group. Disaster Amnesiac hears less naivety and more "history" from her vocals. She sounds as if she'd been singing longer and had more time to know where to add her own unique inflections into the lyrics, as in I See Lisa and her take on You Is Time. Although somewhat different, they both work well within Youth Chairs sound.
Ruminations upon the passing of time featured pretty heavily in the closing statements of Disaster Amnesiac's last post, and I am loathe to repeat myself too much, but damned if it isn't the case that as the years go by, certain actions show their value. It's so important for groups to document their work. Youth Chairs initial story may have ended somewhat lackluster, but I'm thinking Winogrand, Jacobson, Richey, Dart, Morgan, Wagner and Brown are happy that there are tapes extant. All these years later, their tight, hooky Punk Rock Pop songs can be heard. No doubt there's and audience out there for them within the 'net-scaped world of the 21st Century. Browse on over to their Bandcamp page and hear Everything that they had to offer as a working band!

Thanks for the hot tip - I did not know about these folks! Could totally imagine discovering a cut like "Grownups" on side 2 (i.e. the "new wave/power pop" side) of one of those early Rodney On The Roq comps. Awesome stuff.

Hey, Row! I was absolutely wondering if you'd like Youth Chairs music!