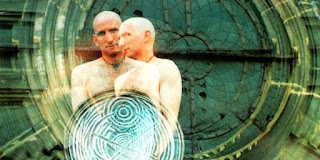 Late last night Disaster Amnesiac was awakened by some sort of rumbling. Knowing that sleep would elude me for a while, I logged on to social media and saw the news of the passing of Stefan Weisser, aka z'ev.
Along with being tremendously saddened by this news, and happy to have seen him play live, Disaster Amnesiac has been marveling at the man's influence. z'ev's use of metals as percussive instruments within his performances has been incredibly influential. What had been a method utilized seemingly only by Avant Garde composers made the jump over into popular culture in a huge away, in large part on account of his steadfast use of it. A few years back, I saw an ad for an "Industrial percussion line" of some major drum manufacturer, and all that I could wonder was if z'ev was being cut in on the royalties. Surely, others that were familiar with him felt the same way? Additionally, his work with textual cut ups and permutations, approached through the lens of pure poetics, was wide ranging and incredibly deep. In many ways, he took the mantle from Burroughs and Gysin and pushed their innovations further. There's also the hermetic, alchemical research done by the man. The way that I see it, this area of his life has only just begun. It would seem to me that any of his writings within that area will be courses of study for serious students of Hermetic arts. Additionally, he had style. Disaster Amnesiac has seen more than a few Industrial percussionists that had been pretty clearly aping his looks and threads. The thousands of people that have read and obsessed over his RE/search Industrial Culture interview will know exactly what Disaster Amnesiac means.  Hell,  I still haven't forgiven a reviewer for the mid 2000's zine Swingset who mocked z'ev in what to me was an incredibly petty and disrespectful way.
z'ev performed and thrived at the margins of the greater society, utilizing a lot of its cast off materials to make, in his words, "...schonste muziek...". His sounds and actions will continue to influence and effect those that have been exposed to them.
Goodbye, z'ev. You truly were an Artist and Poet.