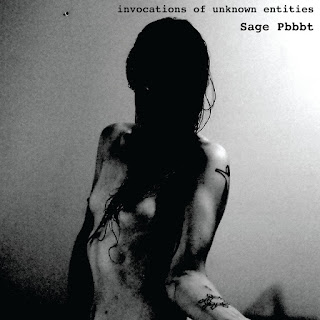 Late night insomnia-related web surfing lead Disaster Amnesiac to Sage Pbbbt's invocations of unknown entities. A promo blurb showed up on a page that I follow, and its descriptor of the release's nature, "True Shamanic Black Metal", had me hitting "purchase" within minutes. After a bit of a wait (things take time to ship from Australia to the U.S.!), it's been acquired and listened to repeatedly.
Consisting of three tracks, Charms (1), Charms (2), and Trange, which are spread over two discs' length, invocations gets down to some very out there musical production. As Disaster Amnesiac has listened, I've marveled at their incantatory otherness.
Sage Pbbbt pairs down her musical tools to voice and percussion throughout. The drumming, which sounds as if it's done with a kit of two bass drums and a couple of tom toms, rolls and thunders with a deliciously non-linear tack. It feels as though she allowed herself the freedom to play patterns and rolls until the time was right to take space, to let the drums breathe. Additionally great for this fan of drums is the way that they sound here: loosely tuned, big and booming. Along with the lovely timbres, it's great to hear what sound like a few different striking implements utilized on the drums. Invocations' percussion sounds wonderfully live, vigorous, and untamed. Not always a common occurrence, that's for sure. Credit must be given here to engineer Dan O'Conner. What a great job of capturing what can be a very elusive vibe.
As for the entities, Pbbbt channels them through vocal accompaniment to the drums. Disaster Amnesiac has been able to identify a clutch separate ones. Among the vocal emanations (I deeply hesitate to call them "styles"), there are screeching banshee, Tuvan shaman, total alien voice, operatic tenor,  Medieval farmer, and urban wild person. During today's listen, a new voice seemed to arise from the mix, so, presumably, the list could be close to infinite, depending on how closely one can listen. It feels like an absolutely tough exercise in extended technique, but, then again, invocations of unknown entities is expressly described as being a work that aims beyond that type of qualifier. Still, the sheer physical range is impressive.
As invocations of unknown entities has played around Disaster Amnesiac for the last several days, I've wondered too it many Black Metal fans will find their way around to it. It most definitely has the Outsider feel that makes so much of that approach to self expression so vital and great.  It most definitely has entranced this listener. Lastly, major kudos to Sage Pbbbt for using the phrase "exploratory music" on the liner note, as well. A real perception changer for me!