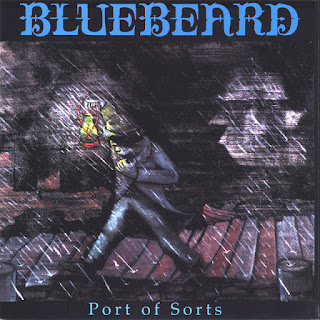 In terms of time and place, and relative to distinctions of raw popularity on their home turf, Bluebeard was a band that faced pretty long odds. Not that any of that was their fault, but, in some ways, this group was kind of misplaced. San Francisco in the late 1990's and early 2000's featured a music scene in which concepts such as the Church of Rock 'n Roll, or Power Pop, or kind of urban ironic gestures seemed to rule the perceptual roost. Bluebeard emerged from somewhere within the City's churn, presenting well thought out and well orchestrated Prog Rock. Not exactly the "sexiest" calling card for a band at that time and in that place. That said, they stuck to their guns, played shows, and produced at least one physical document for posterity, 2000's Port of Sorts.

Disaster Amnesiac grabbed a copy of this CD, and I've thankfully managed to keep hold of it through years of moves, the occasional cull, and so forth. Really glad to have done so, too, especially of late. A few weeks back it entered into my listening rotation, and has stayed there in glowing terms.

Let's start of our perusal of Port with vocalist/guitarist Kevin Meagher. His reedy, alto range spits out lyrics that are quite quirky in their delivery, but done so in an emphatic, emotionally believable way, at least for me. Whether he's belting or whispering, there's an authenticity to both. Kevin was always an intense front man, even sort of scary when on the mic. Phrases such as "still you breathe/and that means that there's that much less for me" on Nadine give weight to that view! Damn dude!  Equally enjoyable is the weary persona that Meagher inhabits during Dirge, a cool sea shanty which features the then about to become a bona fide Rock Star and master of all things stringed, Eric McFadden and underrated SF vocal blaster Robin Coomer. Disaster Amnesiac is really enjoying hearing his personalized Rock singer delivery all over this disc. It brings back fun memories for me. Also of note are astute touches of double tracked vocal lines that enhance but don't overshadow the main ones. It's commendable, the way that Meagher followed his own instincts for his fronting of Bluebeard. On the guitar side, I seem to recall that Kevin wrote a lot of those parts as well. It sounds as if he sticks mostly to acoustic guitar, and the sound of those strummed stings give really nice texture to most of the tunes. The fact that many of these parts are in compounded, unique time signatures is pretty impressive, too.

Moving over to the lead guitar spot, we find Stratocaster guy Jon Axtell. Axtell had spent time previous to Bluebeard in Psychefunkapus, a band that had major label backing and a pretty significant following. So yeah, he was a veteran by the time that this group was working on their music. And one can hear it. Jon's fluency and versatility on the guitar. Dig on his cutting riff and tone and Stone, with its by turns funky and then metallic feels, or Waves, which just pummels as it rolls along in very rocking way. Then there his pure solo statements, such as on the emotionally charged Roadside, which harks back to, say, 1970's stadium statements, and the sharpness of his statement on Mustard. Any time Disaster Amnesiac isolates these guitar elements within the overall mix of Port, I find myself blown away by how inventively musical they all are. Really great guitar playing throughout.

Speaking of inventive, there's the rhythm section of Graham Mclaughlin on bass and Atma Anur on drums. These two are in such a locked mode on every track. The way that these two push and pull with each other, and on the guitarists is really fun to hear and feel. Another veteran, specifically from the Shred Metal scene, Anur puts on a clinic on how to subdivide the beat, all the while keeping things eminently grooving and tasteful. His double bass runs and 16th note hi-hat licks on Waves are worth the price of admission alone. I recall how stoked that Bluebeard were to have him on board, and I can see why as I listen to Port. Mclaughlin keeps a somewhat low profile, but, just as with any great bassist, his stuff is effective in the way that it is felt. Dig on The Stranger for some of his great accenting. The way that these two guys navigate the tricky changes of the songs in an organic, listenable manner is pretty incredible.

Going from the micro to a more macro view of Port of Sorts, Disaster Amnesiac has realized with these recent spins of its songs the cool ways in which Bluebeard fused Progressive Rock ambition with Pop Rock sensibilities. Only one of its tunes goes on longer than the five minute mark (The Stranger), but all of them are jam packed with the twists, turns, and folds that a fan of Prog expects and loves. It's really quite an accomplishment, and it's really quite cool to listen to and be moved by.

Port of Sorts is a fun, eccentric statement from a band that had the courage to do things their way, in spite of the trends that they were surrounded by. As stated, Disaster Amnesiac is certainly happy to have held on to my copy. Anyone that's interested in music that fuses varied elements into a unique voice may want to seek out their own.