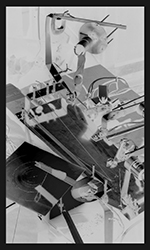 Land's sake, eh? Records, you've worn Disaster Amnesiac out for a bit! After going around and around with Pay Dirt and Real Tree, I've found myself digging into The Blessing of the ZHENGKE ZGA37RG from San Francisco-based Kal Spelletich, a man that has many siblings (is one of them named Nik?)

Along with being part of a large family, Spelletich has also been prodigious within the Industrial/Noise Music scene for many years. His group Seemen definitely has a name for itself, and he's also been involved with Survival Research Laboratories, which in and of itself should be enough of a bona fide for any fan of underground creativity.

For The Blessing, Kal utilized his own talents and creativity to produce several different sound making machines. From these inventions, he's coaxed all kinds of roars, and slides, and wobbles, and shrieks, and cries. Disaster Amnesiac's favorite piece is the very dance-able My Own Fibonacci System, which, after multiple listens, has not failed to get my ass up of my chair and moving, what with its wiggly machine shuffle. Other tracks have the effect of moving the perceptions to various places: contemplation, amusement, sheer terror. He gets many and varied sounds from his inventions. This tape is way far from being a one note type of affair, something not always the case from Noise releases.  As the tape rolls along, you can feel yourself inhabiting their varied spaces.

Also of note is the really great live sound on all tracks. Spelletich did a fine job with sound capture, eh? Records boss Day did not slouch when it was time to mix them. There is a presence to the sound qualities of The Blessing of the ZHENGKE ZGA37RG that can make one feel as if one is there among those intriguing creations.

Not to sound like a broken record or anything (well, maybe just a little bit), but damn it would be nice to be able to be in attendance at some kind of release show for this great cassette. How fun would it be to "enter or operate his pieces, often against [your own] instincts of self-preservation". Or, are we past being able to assume that kind of risk now? Hmm..........