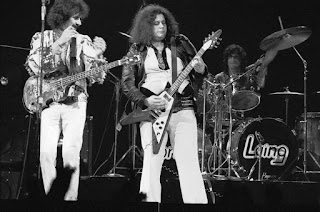 Sad news for guitar fans this year, again! Disaster Amnesiac also mourns the passing of the great Leslie West, known primarily for his stint with the incredible Ur Heavy Rock band Mountain. For me, Ur is a fitting description for them. The way that I see it, Mountain are one of those influences that are felt by pretty much any band that makes heavy music, even if they are not necessarily known by them. West damn near invented the heavy riff style that so many bands make such great use of. Now, there are obviously a ton of musicians that acknowledge this master of the form, and cheers to them; still, I can't help but wonder how much of a forgotten influence Leslie and his work have become over the years, even though they are vital. I recall a conversation in the 1990's with Crucifix guitarist Jimmy, in which he spoke of how much he loved Mountain and West's guitar playing in that band. If you want to hear how inventive he was, find Mountain's version of Satisfaction, what he did to its form is really damn cool, and HEAVY. Goodbye Leslie West, your influence will abide!