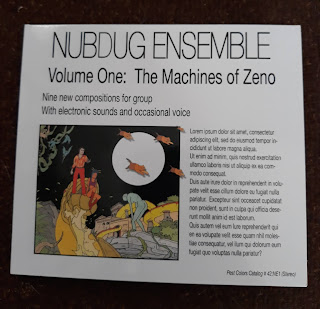 If you're lucky enough to be acquainted with composer, instrumentalist, visual artist, and all around lovely human being Jason Berry, you might just get a Christmas card from him during the later part of the year. Along with the card, Jason includes a CD or two of some of  his really great musical output from the year. As long as Disaster Amnesiac has been getting these cards, it's been Vacuum Tree Head discs, and I am mad at myself for never getting around to enthusing about them. Seriously, last year's two discs remain in my car, and I still listen to them.

No excuses for this year, though. Berry has sent out what appears to be the debut of the Nubdug Ensemble, a group that features several great improvisors and composers. Volume One:  The Machines of Zeno, Nine new compositions for group with electronic sounds and occasional voice has been sweetly rocking my ears for a few days, and I've been digging on its great examples of both the stated elements of composition and improvisation. Jason excels at putting together tight, crisp pieces than usually clock in a very short duration. The melodic variation and rhythmic intricacies that he crams into them always amaze and entertain. Fine examples of this on Volume One include set opener Espejo, driven by great drumming from the one and only G. Calvin Weston and the groovy 5/4 of Alea Iacta Est, with its epic sax/violin harmonies from Jason Bellenkes and John Ettinger respectively. The ways in which these great players, along with those previously mentioned to include guitarist Myles Boisen, reed man Sheldon Brown, bassoonist Paul Hanson, bassist Brett Warren, and keyboard player Amanda Chaudhary, navigate the changes and add to them is just groovy and always sublimely in the pocket. Amy X Neuberg cracks me up with her lyrical delivery on Pimento Boots, and then I just marvel at her range on Aleas Iacta Est. Everyone in this ensemble simply cooks.

The lucky recipient is also treated to sweet little electronic episodes such as Logjammin' with its smoky keyboards from Chaudhary or Prelude to Alea Iacta Est, which has trippy sound design elements from Berry.

As mentioned, Jason is also a very talented visual artist, and this talent shines on the great cover artwork, with its glimpse into what Disaster Amnesiac suspects is a very rich imaginal world that he's dreamed. Additionally, its design is cool in its striking similarity to those great Nonesuch LP's that featured obscure academic composers in the 1960's and 70's.

The only criticism that Disaster Amnesiac has for Volume One is the way in which the swinging and eminently joyful tune Spicy Mango, with its bouncy feel, ends sort of abruptly. It's like, ".....why'd ya leave me hangin' like that, Nubdug?" Ha!

A brief internet search seems to show that Nubdug Ensemble has an internet presence solely on Facebook currently. It's probably too late to ask Jason Berry about getting one of those cards for this year, but any fan of extremely well written and executed Fusion music should probably get on over there and see if he has any copies of Volume One: The Machines of Zeno, Nine new compositions for group with electronic sounds and occasional voice to spare. So much tight music packed into such a short duration! More, please......