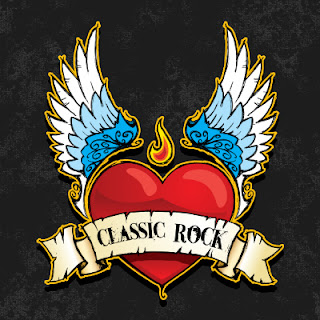 The assignment was simple: "Disaster Amnesiac, you will listen to one hour of Classic Rock, and write your impressions" Mind you, I have NO idea where this assignment came from, but it rattled around in my head for a few weeks, until, finally, I had to submit to it and spend an hour dialed in to my local Classic Rock station.

Has Spotify changed the listening habits of Classic Rock fans? Do they still tune in to those higher end of the dial stations for their musical fix? Or have their kids and grandkids turned them on to the streaming services? I'm sure that this has happened, and yet, those stations continue to soldier on and on. The Classic Rock format will not die, and why should it, really? Some of these songs are really cool. At least for the first 7000 times.

Judas Priest-You've Got Another Thing Coming-song already on when I tuned in. A cool riff, nice pounded simple drum beat; what happened to the finesse of Stained Class?  The solos shred, of course. I guess that that's where the Metal fan finds satisfaction in this tune, along with Halford's defiant lyrics and growling vocal delivery. A fine song, it's what, 40 years old now?

Eddy Money-I Think I'm In Love-the drummer has a nice, clean cymbal beat, especially on the bell portion of the cymbal. Boy misses girl song. He thinks he's in love. He can't get enough. It's gotta be love. I hope it worked out for him and his armour. Pretty neat slide playing during the truncated guitar solo section, at least at first, but then it resolves in cheez whiz.

Def Leppard-Love Bites-a power ballad, full of longing for a departed lover. Those Leppard dudes definitely know what to say to the ladies. Then they bite Nazareth again, this time for a lyrical approach. That's one thing that they also know how to do: synthesize other groups' ideas into a more marketable formula. Really "80's" solo action, kind of trip to Ibiza with a bunch of coke 'n champagne and just livin' the "good life" all over the place for 30 seconds or so. Then the guy opens his yap again, hoping for that 'tang.

The Doors-Break On Through-snappy guitar riff, snappy drumming, atmospheric organ that gets a nice lead break which leads back into the singer telling us about how great his baby is. She get high and stuff, and you know that's cool. A short, sweet blast of Sunset Strip, circa 1966, and that shit stands up to the ages, you know it do.

Black Crows-Hard To Handle-starts off with a Hip Hop worthy drum break, and then the singer shows us to be a guy who listened to the Grateful Dead's 1960's Pigpen phase. This one has groovy keyboards that really push the updated guitar riffs along. Was that person a session player or a bona fide member of the Crows? Nice, gritty, short blast of a guitar solo; then the guitar player dices it up with the singer to bring it all back home. A few years later, and they'd have it frickin dialed.

Guns & Roses-Paradise City-even if you've been tired of this band since 1990, you can't really help but sing along with Axl and the guys at the start. Slash does some guitar hero thing before the main riff, at which point you're either driving too fast or headbanging to that stompin' drummer's magic. Izzy Stradlin', Slash's secret weapon. Not sure what the point of the "so far away" portion is, but, thankfully they get back to that riff and you're OK. But then, there's that chorus again and you may start feeling a bit, ah, stunted. Boogie down ending primes a possible audience member for a sore throat from screaming so loudly for an encore. These guys knew what they were doing, even more than Def Lepperd could've ever dreamed.

Rolling Stones-You Can't Always Get What You Want-some kind of subversive move, getting a youth chorus to start your joint up. Lovely trumpet and acoustic guitar strumming. Mick's friends are all hopeless losers, and Charlie is the best drummer in London. Bluesy slides, congas, organ swirls, girls singing along in harmony, what a mix. Is that, like, Jimi? THE Jimi? Dudes, did you kill him, too? Damn, ruthless motherfuckers, them Stones. But one has to admire their marketing savvy, plus Keith can play really well, even while stoned. I can't hear Bill Wyman, but seriously doubt that he even cares that much. Did I say that Charlie is the best drummer in London?

Stone Temple Pilots-Interstate Love Song-a very fitting title, because this riff has "road" written all over it. It just moves that way. People tended to rag this band, but their drummer has some simple swagger, as does their bass player. It's all about the rhythm section, right? The guitar player, if he wrote the main riff, also deserves some props. As for the singer, he's the guy that most people think of, I believe, when they go "YEEEEAAAAHHHHHH", and he was that trick's master. There's that cool guitar riff again. No real solo, who needed that sort of thing in the 1990's, anyway?

Aerosmith-Walk This Way-yet another slammin' drum break to start things off, yowza! The singer's gibberish is sexay, the guitar players choogle along famously, then someone hits a cowbell, and your ass sure as hell best be shakin'. Like this. They turn around and do it again. The singer gets laid, then someone hits the cowbell again. Joe Perry's sharp tones sure are gritty and cool. The drummer knows just exactly how to take care of business. This song has rocked for close to fifty years. The good shit lasts, bro.

Billy Idol-White Wedding-this is the song that Disaster Amnesiac was most sure I'd hear for this session, and sure enough! Snappy 2/4 beat to keep the riffs moving. I can't figure out whether or not I like Billy Idol's singing, at least until he goes deep croon about half way in. That's a cool approach, Billy! The session dude does a post-Zappa shred solo before an almost KFMDM-style break down and Billy swears fealty to some slut. Hey, what else is Rock 'n Roll for, anyway? Bad snare drum sound, fuck the '80's.

Van Halen-Ain't Talkin' 'bout Love-how you will be missed, Eddie VH! Will Alex continue to drum? It'd be a shame to let that killer player just ride off into the sunset. Jeez, what a rhythm section. David Lee Roth lost a lot of friends there, and he never did mess around. He meant it, always did, always will, and that's why he rocks.  This version is better than the Minutemen's version, even the one on The Blasting Concept II, sorry D. Boon. Hey! Hey! Hey!

U2-With Or Without You-the main reason that I like this song right now is that it's 2:58, and I won't have to listen to its entire duration. Just can't stomach these Jesus Christ Pose types of singers, sorry.

Post Script-I'm super bummed that there was nothing played from Mountain, but at least I didn't have to endure any Green Day. It's the simple things that matter.