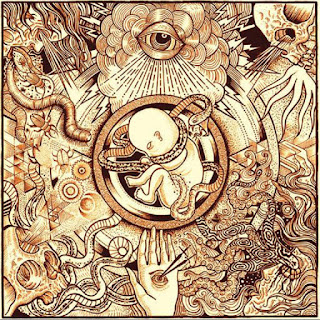 Frickin' lead singers and their bullshit, amirite? One has to figure that, for many instrumentalists, that type of sentiment must have arisen at least a few times within the pursuit of musical aspirations. Sometimes, these folks act upon them, forming purely instrumental combos for projects long and/or short term. Disaster Amnesiac has witnessed a few over the years, and I'm always stoked to hear the players just get down to the business of playing without having to leave room for those pesky frontmen/women.

Lately, I've been digging into one such group, Chowder, and their very cool 2012 release, Passion Rift. Chowder's bio states that guitarist Josh Hart and drummer Chad Rush had been working on this music since 1992, and it really does show. Along with bass player Doug Williams, the group navigates all kinds of intricate Prog Rock changes. These changes are blended with the Doom that courses, seemingly with the greatest of ease, through these northern Maryland players (what in the hell are they putting into the water up there?), along with perhaps just a touch of Punk Rock street level grit just to keep things from getting too heady.

Tunes such as Salt Creep and Custody wend their way through any and all manner of these blends, taking the attentive listener on a great ride through their various zones. Chowder navigates their changes with the assurance of seasoned Prog Rock players, but all the while, one feels the mentioned Doom tones and colors. It's these aspects that really make Passion Rift a fun listen, at least for me. Even while each member goes off, the rest of the other two keep things salty and focused upon a nice, pummeling swagger. Dig on the CD's title track for this, especially, wherein everyone gets some kind of solo turn within its chugging refrains, starting off with a really lovely bit of acoustic picking from Hart. These guys are most adept at keeping the dynamics of band playing going, even while stepping off into their own, deserved spotlights.

Along with the great tones from the guitars and drums, Chowder astutely add mellotron and Moog sounds at certain points, which give some very juicy counterpoints to the strings and percussive hits, especially cool on Mysteroid.

All of the sounds on Passion Rift benefit from this type of attention to small details, along with the ace recording by Mike Potter and the mastering by James Plotkin. Cool too is the surreal cover art of Scott Simpson, which brings to mind the Goth aesthetics of D-Beat Punk more than, say, Hipgnosis graphics.

So, yeah, let the lead singers take a hike for a while as your ears feast upon Passion Rift. They'll still be around when that ride's finished.