Realtree-Splendor Falls on Everything Around; eh? Records #114, 2020 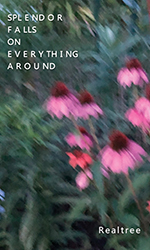 Moving on to cassette number two from the recent eh? Records delivery, we find Splendor Falls on Everything Around, the recording debut from Realtree.

Realtree are a quintet, made up of Carley Olson Kikai on B flat clarinet, Michelle Kinney on cello, Patrick Marschke on laptop, Adam Zahller on guitar, and Noah Ophoven-Baldwin on cornet. It seems as though Ophoven-Baldwin is the leader of the group, in that he is listed as the main composer for the music of Splendor.

Using derivations from Arnold Schoenberg's Verklerte Nacht as jumping off points for this composition, and consisting of a polyphonic core piece and an appendix of duo and trio works, the music on this cassette presents itself to the attentive listener in really magical ways. The word attentive is key here, for the sounds are never forced. Instead, one is treated to several movements of sublime moments. The way that this quintet interact with each other has been blowing Disaster Amnesiac's mind for days. Splendor features the kind of playing that is not flashy or demonstrative. Instead, the players are clearly paying very close attention to both the score and to their fellow group members.  The closer you choose to listen, the more that you'll hear just how tight this group is. There have been times when, as I've listened, I've felt the same way that I did after being exposed to Gagaku, or Miles Davis, or Albert Ayler, or Karlheinz Stockhausen. You know, that otherworldly stuff. Realtree hits on those levels, and speaking of Miles, I swear that I heard a quote from Bitches Brew coming from Ophoven-Baldwin at some point. The ways that Noah slurs and trills with his horn are really fun to hear as well. This action, paired with the stated focus and attention from everyone in the group, and its resulting sounds, have had me further entranced with each listen. I recall one morning where this music, paired with the sunlight moving across a wall opposite of me, when some kind of deep satori was reached. I also recall imagining the score as some kind of tissue, laid over Schoenberg's score, and its sounds appearing as pinpricks of light emerging through.

Splendor Falls on Everything Around is a captivating debut from a very special group.

As Disaster Amnesiac writes this, I'm feeling as though I'm not saying enough, or not going as deep as this music deserves to be treated. Don't take my word for it, then. If you're at all interested in current composition, or Improvised Music, you'll want to find and dig a copy of this excellent cassette for yourself, you will not be disappointed for having done so.